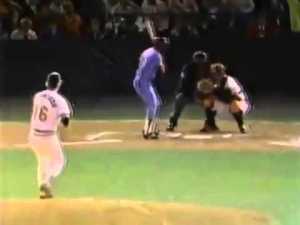 Basically just the intros of the Philadelphia Philles and the Orioles for game 1 of the 1983 World Series. With a little commentary from Al Michaels, Howard Cosell, and Earl Weaver. A brief interview of Orioles shortstop Cal Ripken and didn’t get enough of it to figure out what they were talking about, other than Cosell trying to figure out how Cal Jr felt playing for Earl Weaver with the Orioles. And The Earl talking about the fact that the Orioles lost their DH Ken Singleton. Because back then unfortunately what MLB did for the World Series, was to rotate the hitting pitcher and the designated hitter each year. One year the DH would play in every game. The next year, there would be no DH and the pitcher would hit every game. Which was unfair and gave the National League champion a big advantage during the World Series.