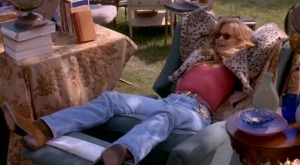 I’ll be one of the first to admit that Housesitter is not a great movie and perhaps not a very good movie. It was pretty funny though at least Goldie Hawn was pretty funny it, but I guess she’s funny in anything because she’s Goldie Hawn. One of the best comedians and comedic actress’s of all-time. But Housesitter is also one of those movies that guys such as myself will watch even if it’s not a very good movie, if it has a beautiful sexy women in it. And in Goldie Hawn’s case a hot sexy women in it. This scene with Goldie going up to rural Massachusetts to check out a house that she knew of because of a guy she slept with the night before that she met for the first time (played by Steve Martin) told her about this place. Which sort of shows the quality of this movie, is a perfect example of what I’m talking about.

Checking out Goldie in those Levis and the suede boots as well with the tank and the coverage of her in that outfit, with her body, the cute butt and the beautiful legs and everything, sort of reminds me of The Dukes of Hazzard where you don’t have to be a fan of that show to be a fan of Daisy Duke (played by Catherine Bach) on that show. Just seeing her in it and seeing her like that is really all the motivation to see that movie. Goldie Hawn is a true Hollywood Goddess. Very funny, a hell of an actress, gorgeous, baby-faced adorable, beautiful body, who wears Levis about as well as any women can. And if you get through lets say the first ten-minutes or so of Housesitter before Goldie appears, I believe she might keep you in the movie the rest of the way.