Posted on August 5, 2015 by Ederik Schneider 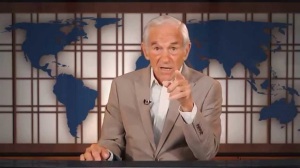 I can’t really comment on what Paul Krugman supposedly said about Ron Paul, because I haven’t seen that Paul Krugman column. I don’t read him that often. From time to time I see him on TV. But I believe one of the issues that the Krugman crowd and his followers have with Representative Paul, is that Paul represents everything that they are against. At least from an economic perspective and to a certain extent and social perspective as well. Since Paul doesn’t support the welfare state, or the nanny state and people as far as the left as Krugman tend to believe in both. That people need need big government to manage their economic affairs for them, but also tell them what they can eat and drink. And tell them they need to wear bike helmets and that sort of thing.

And because Ron Paul Libertarians represents everything that Paul Krugman Progressive/Socialists lets say hate, they try to make Paul look worst than he is and to make him look like something that he’s not. So they’ll try to tie him to these so-called white racist groups. Or to say that Ron Paul actually supports some big government and isn’t as libertarian as he claims, because he’s pro-life on abortion, or has ties with Far-Right Christian-Conservative groups. Representative Paul, is pro-life on abortion, as well as the death penalty, as his record in Congress in the House of Representatives makes clear. But he’s also pro-life on the death penalty. Something the Far-Left won’t give him credit for. But other than abortion he has no real connections to Religious Conservative groups. Other than protecting freedom of religion.

I’m not a big fan of Ron Paul either, other than we tend to agree on the social issues. Except for abortion, but the reason why Paul has so much support with young voters who tend to be liberal and libertarian and even liberal-libertarians, is because he doesn’t want big government in our wallets and homes. And despite the political support that Democratic Socialist Senator Bernie Sanders is getting with his presidential campaign, that is where young Americans tend to be today. And the Paul Krugman followers are smart enough to know that. And know to bring some of those Paul people to them they feel they need to make Ron Paul look like something that he’s not. Which is a bigot, who hates minorities and poor people and everything else that they care about.