The National Interest: Opinion- Albert Carnesale- Deal or No Deal: The Choice Before Congress 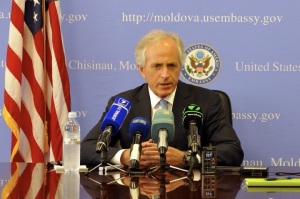 The National Interest: Opinion-Albert Carnesale- Deal or No Deal: The Choice Before Congress

Senate Marco Rubio and other Congressional Republicans say that there is a clear alternative to the Joint Comprehensive Plan of Action. Better known as the Iran Nuclear Deal. But they’re essentially advocating for the status quo. Which is common with Conservatives. “Don’t rock the boat, keep things as are” and so-forth. They’re arguing for continuing the economic sanctions and basically preying that the United Kingdom, Europe, Russia and China do the same things. The problem is our partners in this deal which is why it’s called the Joint Comprehensive Plan of Action have already agreed to the deal and are going forward with it.

And part of that is sanctions relief for a failing Iranian economy. And Republicans, also argue just continue with the economic sanctions on Iran, while everyone else isn’t. The problem with that is the sanctions have already severely hurt the Iranian economy going back to 2005. And now even under all of that economic pressure are now closer to a nuclear weapon then they were ten years ago. Some Republicans say get a better deal. But what would be a better deal. The whole point of a deal and compromise is that you give up something in order to get something in return that you value more.

The definition of a deal, or compromise to Neoconservatives seems to be total surrender. Iran, gives up their nuclear weapons and we won’t invade them. Which is not something that Congressional Republicans are willing to do as far invading Iran right now and perhaps not even trying to hit Iran from the air. And obviously Iran wouldn’t agree to that. I mean if you make that offer to them, they would simply walk away. And to talk to people who know how to negotiate. Iran, will get real economic relief for their economy which they obviously need. But in exchange they’ll give up their nuclear weapons program, if they live up to their end. And if they don’t we’ll catch them if they try to cheat and they’ll pay a price for that as well.

So what Albert Carnesale said in his National Interest piece, “Deal or No Deal”, he’s right on point. Because this is the only deal that is on the table, or has even been offered. House Republicans, haven’t put any alternatives on the table. Senate Republicans, haven’t offered any alternatives either. None of the Republican presidential candidates even the ones with real foreign policy experience like Senator Lindsay Graham, has offered an alternative to the JCPA, or Joint Comprehensive Plan of Action. So the JCPA, is the only deal on the table. If America walks, we walk alone while the UK, European Union, Russia and China move forward without us. And if this deal is fully implemented, they would get the credit for it.