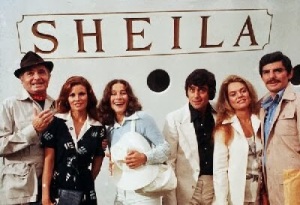 Source:TCM– the cast from The Last of Sheila.

“An eccentric movie producer-gamester invites six film industry friends to his yacht to play out one of his games, the goal of which is to reveal which of them killed his beloved, Sheila.”

“Edgeworth discusses the concept of “playing fair” in mystery stories and illustrates with a forgotten 1973 classic penned by Stephen Sondheim and Anthony Perkins.”

Source:Erin Mills– the cast from The Last of Sheila.

First, with this movie, just to get a little personal: what other reason do you need to watch a movie (especially if you are a guy) than to know that both Raquel Welch and Dyan Cannon are featured at the top of their game (well, Raquel Welch has always been at the top of her game) but these two gorgeous, sexy, goddesses in the same damn movie acting together?

Now, in case you are actually interested in this movie: even with Raquel and Dyan in it, it is still not a great movie, but a very entertaining and funny detective movie played by actors who are playing actors and not detectives. A Hollywood director, James Coburn, gives up his yacht to Hollywood friends and associates in Hollywood who play detective and solve the mystery.

The excellent cast numbers 10 or more. Richard Benjamin, a terrific comedian and very good if not great actor, plays Tom, a film writer, who thinks he knows who killed the woman and gets a lot of it right about who could have done it, who had the access, and so-forth.

Phillip, played by the great James Mason (North by Northwest among other great movies) is reserved throughout the movie but at the end figures it out. Raquel and Dyan are basically just along for the ride and clueless, but, as I said earlier, very welcome additions .