The Eagle Forum: Phyllis Schlafly- “The GOP’s Pro-Family Heritage”: The Christian Right’s Influence on The GOP 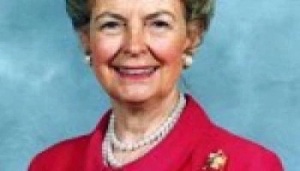 Pro-family, to the Traditional Values Coalition and TVC Warriors, lets call them, that Phyllis Schlafly, is certainly one of, idea of pro-family policies, has to do with this 1950s, or 1940s lifestyle of what they think America is. The American Family to them, is two parents, man and women, father and mother. Anything outside of that is seen to them as immoral and even Un-American. You could argue that being against abortion is pro-family. Because you’re saying you are in favor of preventing fetus’s from being terminated and therefore more babies would be born. Because these Un-aborted fetus’s would end up becoming babies. I disagree with this, being pro-choice on abortion. But you could make a credible argument on that.

But this idea that homosexuality in general and same-sex marriage to be more specific, is Un-American, or anti-family and therefore needs to be eliminated even through big government force, which some on the Far-Right, perhaps even Phyllis Schalfly herself in the name of protecting American families, is stupid. There’s no real evidence backing that up. Which is why an overwhelming majority of Americans now don’t have a problem with gays simply because they are gay. And tend to judge gays as people. Even as much as the Christian-Right has dominated the Republican Party and to a certain extent American politics with some of the Republican Congress’s we’ve had the last twenty years, their influence on American politics now is plummeting. As more Americans, especially young Americans, are more liberal, libertarian and tolerant, then even their parents.

Since the late 1970s or so and you could probably go back to 1974-75, lets say post-Richard Nixon and after the Roe V Wade decision, the Christian-Right, has been a major force in the Republican Party. Coming over from the Democratic Party as the former Dixiecrats in the Democratic Party. And since then with the Far-Right in America stepping up to take on the liberalization of the 1960s and the Cultural Revolution and all the cultural freedom that came from that era, has had a major influence on the GOP and fighting the Culture War. Taking on issues like homosexuality, abortion, pornography, Hollywood in general, Women’s Liberation, multiculturalism in general, which served the GOP well in the elections that they’ve won in the last forty years. But they’re now paying a price as America has moved left and become more liberal, libertarian and tolerant on social issues and cultural in general.
Michael Jacques: Phyllis Schlafly- Who Killed American Family