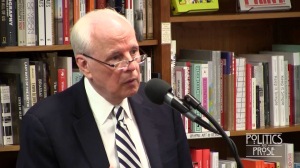 “What did the president know, and when did he know it? That was the iconic question of the Watergate scandal and Dean, who served as Nixon’s legal counsel, argues that it remains to be answered. Using his own transcripts of conversations with Nixon and his circle as well as drawing on archived documents, Dean resolves the outstanding mysteries surrounding the break-in and cover-up. (Penguin Press)”

From Politics and Prose

Not being there or even being alive in 1972, I would say that President Richard Nixon was involved in the Watergate burglary coverup the day he found out about it. The President is on tape like the day after they find out about in June, 1972 as telling his Chief of Staff to direct the FBI not to go into this Watergate business any further, period. I first heard about that in the early 1990s when I was in high school. President Nixon didn’t have someone on his team in the White House to say, “with all due respect sir, this is very important story and case. We can’t cover it up. It would be bad for American justice and bad for this administration.” Perhaps being a big more diplomatic, but he didn’t have someone to tell him no. And this is what should be done instead.

What President Nixon essentially had was a team of loyalists. A team of yes men who believed in him so much, or at the very least believed in how far they could go with him. They weren’t there to say this is what should be done here and there and give their advice. But to find out what the President wanted to do and go about accomplishing those things the best way that they can. President Nixon didn’t have a good team in his White House at least when it came to people who knew what was right and wrong and what should be done. Other than maybe Al Haig who was his second and final Chief of Staff who told him when it was time to step down and resign.