Crooks and Liars: Opinion: Joshua Holland: Outrage Over ObamaCare is Nothing Compared With FDR’s New Deal: The History of Right-Wing Opposition to Social Insurance 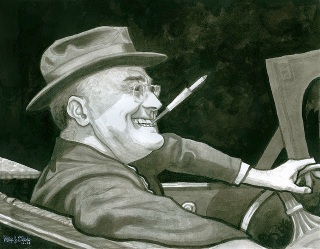 The New Democrat on Facebook
The New Democrat on Twitter
This post was originally posted at The New Democrat on Blogger
In the 1920s and 30s, the U.S. economy was a pretty freewheeling affair. Taxes were low and regulation of the economy was minimal.  Libertarians were as close to utopia as they had ever been.  When the first Franklin Roosevelt administration took office, they were confronted with the Great Depression.  The New Deal that they fashioned in response, though it seemed radical at the time, was actually a very practical, mainstream, economic response.
The Conservatives were saying that this was a natural fluctuation of the market and that it would recover on its own.  On the Far-Left, the Socialists were saying that this is capitalism at its worst and a great example of how it doesn’t work.  We need to replace it and come up with a completely different  economic system.

FDR was a pragmatic Progressive and didn’t enter the White House with a bold agenda for dealing with the Great Depression.  He had ideas but nothing big and bold.  In airplane pilot’s lingo “He created the New Deal by the seat of his pants.”  Saying that the Roosevelt Administration made it up as they went along is probably too loose but they put in ideas as they got them.  They had not developed a New Deal agenda as far back as the 1932 presidential campaign.The Socialists were calling for steep new taxes on the wealthy.  I’m sure they wouldn’t have left what was left of the middle class off the hook.  They called for nationalization of industries and creation of a Nordic-like welfare state.   The Libertarians were saying that government should stay out of the way and let the economy fix itself, if anything lower taxes and regulations on private capital.FDR’s New Deal was in the middle.  It affirmed American capitalism as a good system that empowers millions of Americans to be successful.  What it lacked, and what the New Deal provided, was an insurance system, paid for by the economy itself, for people who need help when the system failed.  This is how Social Security, Unemployment Insurance and Welfare Insurance were created.  The New Deal, included, as well, new infrastructure investment to do needed work that the private sector was neglecting and to provide employment to millions of Americans.