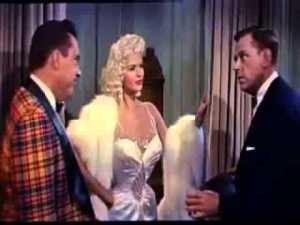 “Theatrical trailer for the 1956 film THE GIRL CAN’T HELP IT starring Jayne Mansfield, Tom Ewell and Edmund O’Brien. Directed by Frank Tashlin. Based on the Broadway play “Do Rei Mi” by Garson Kanin.”

The real Jaynes Mansfield only wanted to be a star and move to Hollywood and make it big in the entertainment business as an actress, singer and perhaps even comedian, she could do it all. (At least when she was sober) But in this movie she plays someone who essentially just wants to be a good housewife to the man she loves and take care of their children.

Her boyfriend (played by Edmund O’Brien) has completely different ideas for Jerri Jordan. (Played by Jayne Mansfield) He plays an entertainment mogul who has produced big hits in the past and made a lot of money, but hasn’t produced one lately and is sort of looking for a big comeback.

Fats Murdoch (played by O’Brien) also has other business connections, including being involved in organized crime and has even done time in prison. Which is one of the reasons why his career in the entertainment business is in, shall we say recession, where he hasn’t been active lately.

Murdoch wants to marry Jerri, but the problem is she isn’t known yet and is worried that marrying someone who is unknown and perhaps seen as a nobody could hurt his image. He knows that she is physically a goddess, a hot baby-face and perhaps even baby girl voiced goddess, with an incredible body is a star in waiting and just needs someone to lead her in the right direction and to get noticed.

Where Tom Miller comes in (played by Tom Ewell) whose career is also in a bit of a slump. But who is a talented agent and scout who has made entertainers stars in the past, but hasn’t done anything lately.

The Girl Can’t Help it is certainly not a great movie. Very funny, at times sure and pretty entertaining, but Jayne Mansfield like in real-life is so overwhelmingly adorable, hot and sexy in this movie, that she makes the movie worth watching on her own.

Jayne is also very funny in this movie like she is in most of her movies and Edmund O’Brien and Tom Ewell are very good and funny in this movie as well. This movie also features Julie London, who plays one of Miller’s former clients who became a big star, but dumped him after they get involved. So this is a pretty good movie and Jerry Jordan helps Miller get over Julie London who plays herself in the movie.