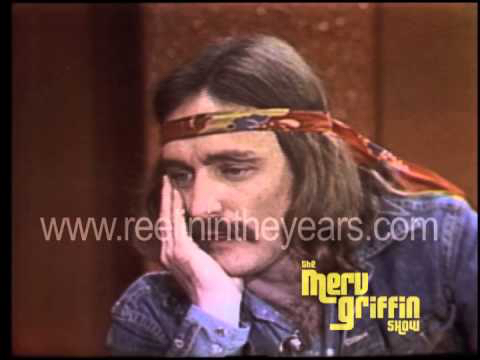 “Maverick actor/filmmaker Dennis Hopper appeared on the Merv Griffin Show in 1971 as a disenfranchised idealist having recently fallen from Hollywood’s good graces. After riding high on the success of “Easy Rider” he made “The Last Movie” which won the top prize at the Venice Film Festival but was trashed by critics and moviegoers in America. He certainly stands out on this panel which includes fellow actors James Brolin and Diane Baker as well as baseball legend Willie Mays.

“Easy Rider’s tagline of “A man went looking for America and couldn’t find it anywhere” transcended moviedom. Once called The Loners, Dennis Hopper co-wrote, directed, and starred in the Oscar-nominated biker flick about two men riding motorcycles from Los Angeles to New Orleans to Florida during the tumult of the Vietnam-era ’60s. Peter Fonda and Jack Nicholson also starred, and Fonda co-wrote the script with Terry Southern and Hopper, and produced it.” 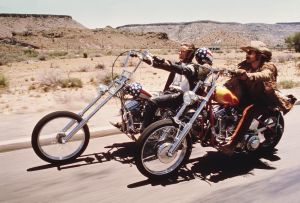 There is such a thing as being ahead of your time, but I don’t think that applies to Dennis Hopper. Who I consider to be a baby boomer born in the mid-1930s, I believe 1936. He is obviously not a boomer, but he fits into that generation so well, especially the Hippie Culture, the Counter Culture of the 1960s. And a lot if not most of his movies from the 1960s and 70s, had something to do with the current culture of that era and a lot of them were about Hippie Culture. So if he had a movie that didn’t do very well in that era and it was about Hippies, it probably wasn’t because Dennis was ahead of his time. That argument could’ve been made about someone making a counter-culture movie in 1955 or so. But you make a movie like that in the late 1960s and early 1970s, you’re in the perfect time frame for that movie.

So Dennis’s problem with The Last Movie, perhaps was the title, but anyway it might just have been that the movie wasn’t very good. And I’m saying this as someone who is a big Hopper fan and have liked a lot of his movies. As far as this interview, classic Dennis Hopper I believe, at least from that era. I mean he just did Easy Rider in 1969 and he walks onto the stage as a Hippie drifter. Which is essentially what he played in Easy Rider. He is a man for his times, as he was back then and is still today. So whether he doesn’t do as well as he wants to, it just might be because the movie or his performance wasn’t as good as it needed to be for him to do as well as expected to do. It is easy to put it on the audience, or people you work with, but harder to look at yourself to see where you came up short.