Listening to Republicans today talk about the need for limited government and limiting the size as well as growth of government, is like talking and listening to a 400 pound man ( perhaps in New Jersey, to use Donald Trump’s reference ) talk about the need for diet and exercise. It’s hard to listen to it with a straight face, because they’re only speaking from bad experience. Sort of like hearing a parent tell their kids not to do exactly what they did when they were the exact same sage. Like staying out late, eating too much junk food, playing video games, etc.

Source: The Democratic Underground– The King of debt Donald Trump 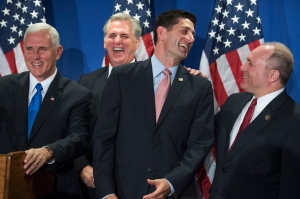 The Republican Party, is no more the party of limited government and fiscal responsibility, as they’re the party of individual freedom and federalism. They believe in freedom for the individual, if that person lives like them and shares their same cultural and religious values. They’re the party of federalism, if states and localities are doing exactly what they want them to do. This case with Attorney General Jeff Sessions and immigration, with so-called sanctuary cities is a great example of that. Marijuana where the Trump Administration, wants to interfere with state marijuana laws and say that the states can’t have their own marijuana laws, is another example of that.

And perhaps more important than anything else because it affects our economy with things like interest rates and banking, the Republican Party is the party of fiscal responsibility, only when Democrats are in power and deficits are high. Once Republicans retake the White House again and have a Republican Congress as well, they act like fiscal responsibility is something they’ve never heard of. Or deficits and debt are no longer major concerns, because they’re back in power and know how to manage those things. Or as Vice President Dick Cheney said back in 2003 on Meet The Press, “deficits don’t matter.” Or as Donald Trump has said, he’s the king of debt and knows how to manage it.

This Republican Congress hasn’t done much in how the year in a half that they’ve been in power. But they did manage to pass three big spending bill with big spending being the two key words. I guess Republican would be another key word as well, but they passed a gigantic federal budget, a gigantic spending bill with both of those bills only making the most obese person in the world happy with how they big and porky they are. With Congressional Republicans and the Trump Administration essentially saying that, “why should we be worried about the national debt and deficit, when we’re not going to be the people who have to pay for it?” And of course the so-called tax reform bill, which is another way of saying borrow two-trillion-dollars to pay for tax cuts, so we can tell the Republican voters that we actually did something while we’re in power.

Vice President Joe Biden, back in 2010 while he was campaigning for Congressional Democrats on the campaign trail, said in a speech, “that this is not your father’s GOP.” Meaning this is not the same Republican Party that he worked with in Congress as a Senator for 36 years, or the party he saw while growing up in the 1950s and 1960s. The Republican Party today is not even the Republican Party of 2010, 2011, 2012, that actually believed in fiscal responsibility. They’re now the Donald Republican reality TV show party that only seems to be in the business of trying to stay in power. Where the only principal is winning elections and defeating Democrats. And as a result they by themselves are killing fiscal conservatism and fiscal responsibility. Which is a shame, because it means that everyone else gets to pay for borrow and spend big government.