Posted on November 23, 2014 by Ederik Schneider

When I think of great all around tight ends, I think of guys who can block first, which is the most important job of a tight end. Has good hands and catches the ball well and catches the ball well in traffic. And can run with the ball, doesn’t have to be fast, but who gets open and can gain yards after the catch. Mark Bavaro had all of those skills and was great in all of those areas and then some perhaps to the point that when he was healthy, you are not only talking about the greatest tight end of the 1980s, but perhaps the greatest tight end of all-time when he was healthy and in his prime.

Today’s tight ends are almost thought and only thought of as big receivers who are supposed to catch the ball, especially on third down and in the red zone. “Yeah and if he can block, great, but we are going to throw the ball forty times a game anyway. And we may just run the ball to give our quarterback’s arm a little break”. But there’s a really important reason why the tight end lines up next to the offensive tackle. Because the TE is an extension of the offensive line and his job is to block and help the OT with double teams.

If your tight end doesn’t block, you are not going to run the ball very well. Because now the defense will always have a linebacker free on the outside to stuff the run or rush the QB. And the smart defenses will lineup their best blitzing outside linebacker against the weak pass catching TE. To take advantage of that matchup, but if you do that against Mark Bavaro, you are now risking your best blitzer getting stuffed at the line of scrimmage. Because Mark Bavaro was like another offensive tackle with his ability to block.

Mark Bavaro was perfect for New York City and North Jersey and Bill Parcells. Tough blue-collar Italian guy like Bill Parcells who fit in so perfectly with that community. Not just Italian-Americans in that area, but the broader working class of the New York area. And had it not have been for his leg injuries, we are not only talking about a first ballot Hall of Famer who would already be in the Hall of Fame right now, but perhaps the greatest all around tight end of all-time. That is how great Mark Bavaro was. 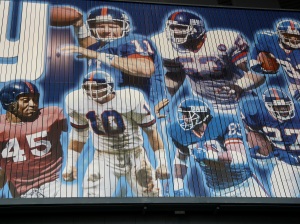