Was the 1958 NFL Championship game the best game ever played, well if you look at the 5-6 turnovers in that game and both teams getting in the red zone and not scoring and other mistakes like that of course not. The 1967 NFC Championship between the Dallas Cowboys and the Green Back Packers especially if you consider the weather conditions and where the game was played in Green Bay, Wisconsin, was a much better played game.

But the Cowboys and Packers still manages to play very well in that game. Even though it was played under those conditions. And the Hall of Fame head coaches Tom Landry and Vince Lombardi coaching that game and all the Hall of Fame players that played in that game. Cowboys DT Bob Lilly, WR Bob Hayes, CB Mell Renfro. For the Packers QB Bob Starr, OT Forrest Gregg, OG Jerry Kramer, DE Willy Davis, LB Ray Nitchke and others. I believe that’s the greatest game ever played as far as the quality of the game.

And that’s different from the most important game ever played. Because the 1958 NFL Championship had more to do with the future of the NFL as well as pro football. It made it easier to form the American Football League because of the attention that the 58 NFL Championship got, because now it was clear that there was room in America for more than twelve Pro football franchises, that were all in the NFL. And the NFL wasn’t looking to expand, but instead consolidate the revenue that it had.

The NFL had just survived the Korean War where it lost players to that war, World War II obviously same thing the Great Depression and somehow survived financially from that and came out better and on top from where it was before. What makes the 1958 NFL Championship and yes it was a very well-played game and even a great game to watch as far as how entertaining it was, was for one it was the most important game ever played. You’re talking about the two best teams in pro football playing for the NFL Championship in New York at Yankee Stadium in front of a live national televised audience, with two great football teams that had great coaching.

For the Baltimore Colts coached by Weeb Ewbank who’s in the Hall of Fame. For the New York Giants, forget about their head coach Jim Lee Howell and (I know with a name like Jim Lee Howell how can you forget that name) but you got Vince Lombardi as the offensive coordinator and Tom Landry as the defensive coordinator. As they say in Brooklyn, forget about it! That’s all you need to know about the Giants coaching staff.

These are three of the greatest defenders of all-time and they had the best defense in the NFL as well and scored enough points to win. With Frank Gifford, FB Alex Webster, WR Tobin Rote and QB Charlie Connerly who could both run and pass and do them well. Anytime you get a matchup like that, under those conditions in a championship final on network TV and radio with all the major newspapers covering the game, you got something special, the NFL at this point was a major sports league.

But Major League Baseball was still number one and college football was probably number two as far as team sports. But this game set the stage because of the audience it drew, still one of the highest rated programs and intended games in pro sports history, for the NFL by the early 1970s to be the dominant sports league in America if not the world.

What the 1958 NFL Championship Final did, was set the stage for the NFL and the AFL to become the number one sports league in America because of the teams that played it, the players that played in it, how well they played. And of course the audience it drew, because now America could see how great of a sport pro football was and decided they wanted to see a lot more of it. 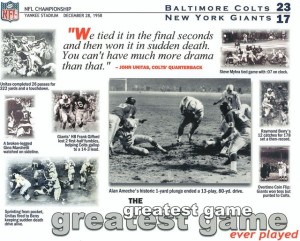