I believe it’s the common wisdom that for people to be member of cult groups, that there’s clearly something wrong with them. They have some mental disease, that no one else has picked up on or thought it was a big enough problem that it needed to be addressed. That all cultist’s lets call them are ex-convicts or have spent time in mental institutions, that’s clearly not the case. All you have to do to know that, is to look at the Manson Family from the late 1960s.

Most if not all the members of the Manson Family, were all educated, headed for college if they wanted it. And all came from middle to upper middle class families, all with loving parents. Except for their leader Charlie Manson, who had a at least borderline nightmarish childhood, never knowing his father. A mother who didn’t want him and wasn’t prepared to raise him, who got passed around from house to house, who I believe never even attended high school, at least on the outside. Jonestown is another example of that where either their leader in Jonestown was well-educated and very intelligent.

But Jim Jones was also borderline evil and became a very dangerous man responsible for the murders of hundreds of people. Jonestown again was made up of young middle class people who were somewhat lost in life and not sure where they were going. Who hated the injustices they saw in life and were looking for an escape. They were essentially a collection of Socialists who were looking for an opportunity to build a Socialist Utopia. This was the vision of Jonestown that was to be set up in the jungles of Guyana. A communitarian lifestyle where the cultist’s would live off of each other and live off the land.

It’s not so much the mentally ill that are targets of these cult groups, but people who have talents, intelligence, abilities, but are not sure where they are going in life. These are the people who get picked up by these groups, because these cult leaders see potential in these people, that they want to exploit and take advantage of in all sorts of ways. The Manson Family and Jonestown are perfect examples of this.

People who tend to fall in these cult groups, tend to be looked down from people on the outside, who don’t understand cult groups as stupid or crazy. “Look at those nuts or morons they deserved what they got”. That sort of thing when people who fall into these groups could be the next door neighbor in a middle class or wealthy community. These groups tend to be made up of people who are somewhat lost in life and looking for a break from reality. 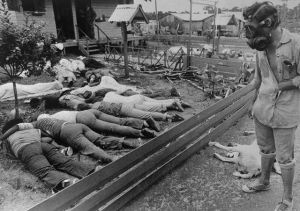 Blogger on a whole host of subjects.
View all posts by Ederik Schneider →
This entry was posted in Cult History and tagged Dangerous Cults, Dangerous Devotion, Decoding the Past, History Channel, Religious Cults. Bookmark the permalink.