Vice President Richard Nixon trying to make the point that America was still stronger than Communist Russia at this point across the board. This was one of the biggest issues of the 1960 presidential campaign between Vice President Nixon and Senator John F. Kennedy. Was America moving forward and advancing and at its strongest point possible to take on Russia if it needed to. The Vice President seem to believe that America was, but that we could always to better. Senator Kennedy constantly making the point that America stagnated especially economically with the recession of the late 1950s and early 1960s and that we needed to get moving again. 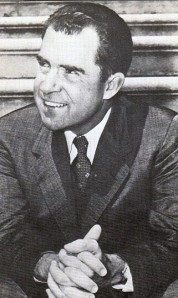