Here’s an idea. Instead of having taxpayers who mostly work in the middle class be forced to subsidize low-income workers for their food, housing and health care, instead penalize employers who pay their employees so low, that they need to collect public assistance from taxpayers in order to survive. Eat, housing, health care and so-forth, instead of subsidizing low-wages in this country. And tell employers the money we are now paying for Food Assistance, Public Housing and health insurance, they can get that back if they train their low-income workers so they can get a better job even in their company. Or somewhere else and not have to collect from public assistance at all.

What taxpayers are doing now and again mostly in the middle class, is being forced to make up the difference in income that employers do not pay their low-income workforce. Because these low-income workers whether they work or at Wal-Mart, or for a fast food chain, do not make enough money to cover their housing, groceries and health insurance. They have to get that money from taxpayers instead of their employer so they have what they need to survive. Along with the corporate welfare and paying corporations to send their jobs oversees. When these employers have more than enough resources to pay their employees what they need for the basic necessities. Not so they are rich or even middle class, but so they can afford their rent, their groceries and their health insurance. 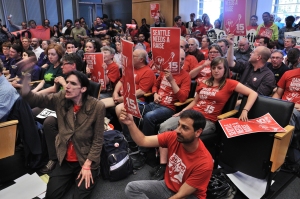