.
This post was originally posted at FreeStatePlus on WordPress

The Barry Goldwater conservative movement of the mid 1960s and even late 1960s launched Ron Reagan into office as President of the United States in 1980. But actually Congressional Republicans didn’t get the majority back in the House, or Senate in the mid and late 1960s, but made them a strong minority in both chambers. As well as Richard Nixon elected and reelected President of the United States in 1968 and 72. Placed Ron Reagan in strong place to be the GOP frontrunner for President.

After losing in 1976, Ron Reagan became the Republican frontrunner in 1980. The way Gerry Ford governed as President of the United States in the mid 1970s, fiscally conservative, as well as respecting personal freedom and civil liberties, all of these things started with Barry Goldwater when he ran for President in 1964. And took sixteen years for it all to come together with a Republican president in 1980, a Republican Senate for the first time, since 1952 and a large Republican minority in the House of Representatives in 1980 as well. Where House Republicans led by Minority Leader Bob Michael, could work in coalition with right-wing Southern Democrats in the House. To pass and block legislation.

What happened with the Barry Goldwater conservative movement of the mid 1960s and what it finally led up to and what’s going on with the Ron Paul libertarian movement of today in the Republican Party, both have one thing in common. That neither one was big enough to be a governing coalition in the United States. Or even a leading coalition in the Republican Party. Where they hold a lot of leadership positions. Back in the mid 1960s, America was still in the LBJ Great Society Progressive Era.

Where Americans by in large wanted and liked big government taking care of them. And we are obviously pass that now. But Ron Paul’s problem in the Republican Party are the Neoconservatives and Religious-Right are still in charge of the Republican Party. But what they also have in common with the Goldwater Conservatives of the 1960s, is the old-guard is dying off and losing influence. While the Goldwater Conservatives were growing back then. And the Libertarian Republicans are growing today, as the Religious-Right and Neoconservatives are dying off and losing influence.

As then U.S. Senator Jim DeMint said back in 2012 before he became President of the Neoconservative Heritage Foundation political action group, “the Republican Party needs to become more Libertarian for them to be successful in the future.” But they do not have to embrace all of their positions, but they have to move in that direction on social issues. And get back to being a real fiscally conservative party. And stop nominating presidential candidates who run as fiscal Conservatives, but have records that suggest otherwise. Who run as Religious-Conservatives, but have records that also suggest otherwise. And get back to being a real Conservative-Libertarian Federalist party again. That can compete and be successful all over America. 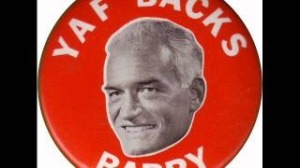