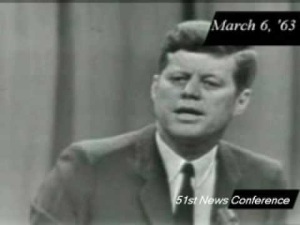 John F. Kennedy, when he became President of The United States in 1961 wanted to do a few things as it relates to economic policy. Go further in social insurance so more people could have access to affordable health care, especially senior citizens. In the areas of health insurance, but also more hospitals and health care professionals. But also in tax reform, lowering marginal tax rates where back in the early 1960s income tax rates ranged from 25-90%. Which was a drag on our economic growth, because Americans weren’t seeing much benefit from their success and production.

So President Kennedy, wanted to lower taxes rates, because the Federal Government got a big chunk of what Americans were making. Which is why President Kennedy wanted to cut tax rates across the board. See more money in the economy, more take home pay for Americans to spend that money to see more economic growth. And these tax cuts served as an inspiration for the tax cutters on the Right in the late 1970s and early 1980s. That led to tax cuts at the state levels in the late 1970s and of course President Reagan’s Economic Recovery Act of 1981.

But a Kennedy tax cut and a Barack Obama tax cut, are very different from a Reagan tax cut, or a George W. Bush tax cut. President Kennedy, didn’t have this idea that tax cuts automatically paid for them self. And unlike supply siders he believed that deficits mattered. And that if you cut taxes, you should do that by paying for them. And he did that by cutting wasteful loopholes in the Federal tax code. Jack Kennedy, wasn’t a Conservative as some on the Right like to suggest. And he wasn’t a big welfare state Social Democrat that today’s so-called Progressives like to believe he was. He was a Liberal in the true sense. Not anti-government, but believed a limited government could help people who needed it help them self.