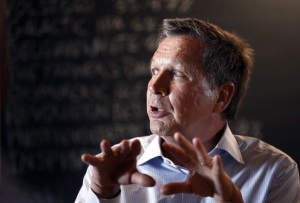 Just to be clear, I wouldn’t vote for John Kasich for president perhaps on any circumstances. Unless there was some reason why only Republicans were running for president. But what I’ve seen from him so far looks like he’s the best the Republican Party has and is someone who they desperately need if they’re going to win Latinos back and win back the White House. The Republican Party, won’t win the White House back until they win Latinos, Asians, Jews and get closer to Democrats when it comes to women. They’re Anglo-Saxon Southern-Protestant rural base is dying off and they know that.

Governor Scott Walker, simply too far-right on social issues. Constitutional amendment to ban same-sex marriage, allowing for employers and other groups to deny gays access simply because they’re gay, no abortion under any circumstances, he’s flipped on immigration and is no longer in favor of a policy to deal with the 10-15 million illegal immigrants other than perhaps sending them home. So he’s basically the Rick Santorum of 2016 and would have a hard time winning outside of the Bible Belt and would have a hard time even winning his home state.

Donald Trump, is nothing more than a one man reality show and if he still looks like a contender and December, I’ll consider apologizing. Jeb Bush, doesn’t want to be his brother, or father and yet its hard to tell how he differs from G.W. at least on economic policy. He now says the Iraq War was a mistake, but blind people could see that. He doesn’t seem to know what he wants to be right now other than what he was in Florida as Governor. But not a lot of people know what kind of Governor he was. He might end up being a weaker frontrunner than Mitt Romney.

Marco Rubio, the younger Jeb Bush? He’s G.W. and Dick Cheney when it comes to foreign policy and national security. He hasn’t come out with much of an economic policy yet. On immigration, Senator Rubio, Governor Bush and Governor Kasich, are where the party needs to be to win back Latinos and probably Asians as well. But all three men are going to have to do better than that and offer a vision to win those groups back. But Kasich, is a little different. Blue-collar guy from Pennsylvania and Ohio. Nine-term U.S. Representative and two-term Governor of Ohio which is a swing state. One of the lead authors in Congress of the 1997 Balanced Budget Act.

John Kasich, has real Washington experience and real experience outside of Washington. As well as private sector experience that he had after he left Congress in 2001. He’s not a fan of same-sex marriage, but wouldn’t do anything to stop it and has said he’s even been to a gay wedding. This all coming from a center-right Republican. Republicans, have to win Ohio back, as well as breakthrough the Democratic lock on Asians and Latinos. They also need to win back blue-collar voters regardless of race, or ethnicity. Kasich, might be the only Republican who can do that. And if I’m Hillary Clinton, or Jeb Bush, Kasich would be the person I would be most concern about.