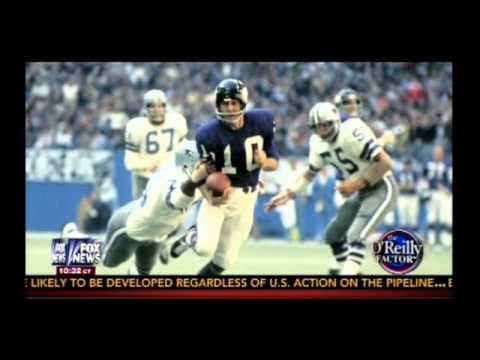 “A pretty heavy price to pay for all that fame and fortune, mighty alluring for sure but not really sure its worth it. look at Bernie Kosar, the guy can hardly talk due to all the head injuries he had.”

I guess I have mixed feelings about Fran Tarkenton who is one of the greatest quarterbacks of all-time. And probably would be in my top ten, but I like a lot of other people who follow the National Football League I judge QB’s by not only how they play in big games, big regular season games that determine division championships, playoff positioning as well as playoff games, but I also judge QB’s by how they played in the biggest game. Which of course is the Super Bowl and yes you can argue that those Minnesota Vikings teams were the second best team in each Super Bowl that Tarkenton was involved in.

And I’m not looking down on Fran because the Vikings lost all of those games. But I’m looking down on him for the fact that he didn’t do everything that he could to lead the Vikings in winning those games. He had three shots at the Super Bowl and didn’t play very well in any of them, couldn’t even get the Vikings to the end zone in Super Bowl 10 against the Pittsburgh Steelers. A game where the Vikings defense played very well and kept them in the game the whole way, but where their offense did almost nothing.

So that’s where Fran Tarkenton comes up short with me, but as far as how QB’s have done before the Super Bowl, Fran is one of the best of all-time in games before the Super Bowl, not many better. John Unitas, Joe Montana, John Elway, maybe Roger Staubach. Not necessarily in that order, but Unitas is number one with me at least overall. And if you look at QB’s and what they are able to do with the tools that they work with and the talent they have around them, Fran is one of the best ever.

Fran is one of the best of all time, leading a mediocre New York Giants team in the late 1960s to a winning record. Didn’t have a running game or a very good offensive line to use as an example. Defense came up short as well, but he was a great QB who always knew who to throw the ball to and how to get the ball to the available talent that he had. Like WR Homer Jones and TE Bob Tucker who were good players, but this wasn’t the West Coast San Francisco 49ers or any team like that. But Fran got the most out of what he had to work with.

In defense of Fran Tarkenton, this idea that he had a weak arm. If you look at his highlight films, you see him completing a lot of long passes and he did have good WR’s. Like Sammy White, John Gilliam, Ahmad Rashad, Chuck Foreman was the Roger Craig of his era and like another WR. And you also see Fran drilling some passes into tight coverage. He didn’t have a cannon, but a strong enough arm to make the right throws. And the Vikings of that era were a possession passing team anyway. So he was a great QB, but I don’t have him up higher because he came up short on the biggest stage three times and never came up big.