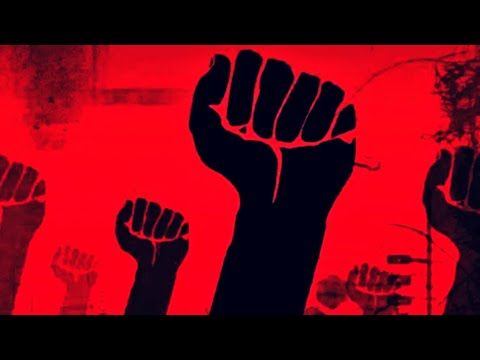 Before I comment on this video, I feel the need to talk about the different socialist factions not just in America, but around the world, because they’re all actually different from each other.

A Socialist is: “A person who advocates or practices socialism.”

Socialism: “A political and economic theory of social organization which advocates that the means of production, distribution, and exchange should be owned or regulated by the community as a whole.”

A Communist is: “A person who supports or believes in the principles of communism.”

Communism: “A political theory derived from Karl Marx, advocating class war and leading to a society in which all property is publicly owned and each person works and is paid according to their abilities and needs.”

Social Democratic: “Is the name of socialist parties in some countries. The term came to be associated with the positions of the German and Swedish parties. The first advocated revisionist Marxism while the second advocated a comprehensive welfare state.”

All of the definitions come from Wikipedia.

When people talk about Scandinavia and the economic system there and point to how well it works (according to them) they’re talking about Social Democrats and social democracy. To put it simply: social democracy is an economic and political philosophy that combines the best of capitalism and free enterprise, with democratic socialist (or social democratic principles) dealing with taxation, large welfare state, and regulation of the economy.

If you look at Sweden and Denmark (to use as examples) they tax business and capital at low rates, while also encouraging free trade and foreign investment, while taxing individuals with a lot of sales and payroll taxes, to fund their generous welfare state.

What’s also important about Scandinavia is that if you look at the entire territory of Scandinavia, it’s roughly the size of the entire region of Western and Central Europe, but with only about 30 million people from all of those states. A lot of land, with very few people occupying it.

So if the so-called Socialist-Left in America actually believes what they believe and are not going from some early-life crisis that was perhaps caused by them drinking too much capitalist caffeine and spending too much time on their capitalist laptops and capitalist smartphones and they actually believe what they say they believe, Scandinavia is not where they would be pointing too when they talk about a socialist state in America. At least not the economic system.

Leftists in America (whether you’re talking about Socialists or Communists) are more inline with what Dinesh D’Souza (someone who I rarely agree with on anything) was talking about when he was talking about Karl Marx and class struggles. Where you have men vs women, straight vs gay, majority vs minority, and seem to believe that people who’ve been in power for the most part (Anglo-Saxon Protestant men and other Caucasian men) are the enemy of what they would call a more tolerant and progressive America. And view people who don’t come from repressed communities in America as the opposition and people who need to be thrown out-of-power.

The New-Left in America is more inline with the leftists and Socialists of Latin America (Cuba, Venezuela, Brazil) then they are inline with Scandinavia and Europe. Social Democrats in Europe, don’t look down at people because of their race, ethnicity, gender, etc, but instead want their countries to work well for everyone regardless of their DNA and how they were born and believe social democracy is the best way to achieve Utopia.

To me the best example of Socialists are Social Democrats, because those folks don’t want government to punish people and sanction people simply for being successful, but want everybody to succeed. Instead of the Neo-Communists who not only look down at people for being wealthy, but have issues with people simply because of their background and culture.