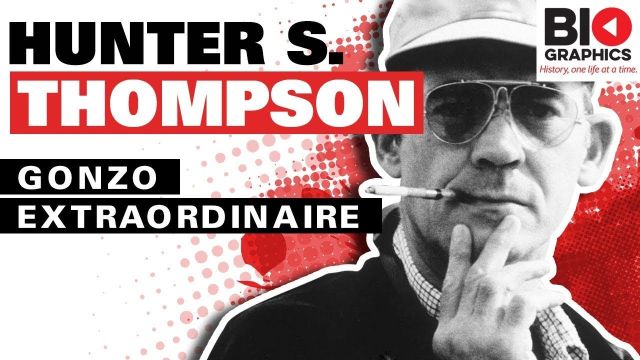 I guess I look at Hunter Thompson not as a political satirist or a comedian, or perhaps even a journalist, but as a satirist on American life who was so interested in America that he wanted to find out as much as he could and then make fun of it. I believe Hunter loved life, perhaps especially American life, but wanted to have a good time and has as much fun in life as possible and used humor in his writing and other outlets to express that.

You can watch the video here Biographics

Fear and Loathing in Las Vegas, is the perfect example of what I’m talking about. Where he goes through Las Vegas looking for the American dream. I believe he’s someone who was consumed with information and finding out as much as possible about people and things that he was interested in.

Fear and Loathing on the Campaign Trail is where you see the political satiric side of Hunter Thompson. I mean how you not cover the George McGovern 1972 presidential campaign without a sense of humor, especially if you were a McGovernite who actually managed to stay sober during that entire campaign.

So perhaps just yourself, Hunter Thompson, and Senate McGovern himself who actually believed everything that he said during that campaign as the only sober people who had anything to do with that campaign. With the rest of the campaign being made up of people who were flown in from Hippie communes in California who really did believe that every single problem known to man and perhaps problems that hadn’t even been invented yet, could be solved if you just put government in charge of it.

I love America and love practically everything about America ( except for the ignorant fringes in America and the crazy people ) but when you have the political system that we do with voters who complain about corruption in politics and corrupt politicians, while at the same time you they vote for and reelect those same politicians, like people who claim to hate fast food, even though that’s all they eat it, you have to be able live life in America with a sense of humor and be able to laugh about it. Otherwise you might as well just become an alcoholic or check yourself into a mental institution, because you’ll go crazy. America was the perfect country for Hunter Thompson and it’s a great thing that we had him.