“Learn more about Ayn Rand’s philosophy of Objectivism—a philosophy for living on earth.”

From the Ayn Rand Institute 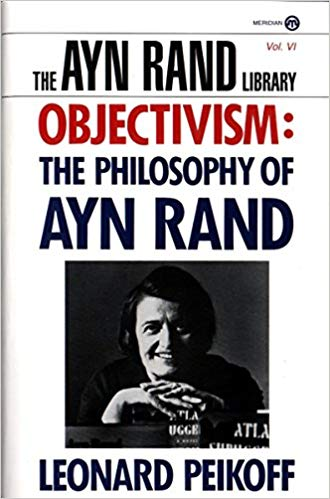 From The Atlas Society

“Objectivism is the philosophy of rational individualism founded by Ayn Rand (1905-1982). In novels such as The Fountainhead and Atlas Shrugged , Rand dramatized her ideal man, the producer who lives by his own effort and does not give or receive the undeserved, who honors achievement and rejects envy. Rand laid out the details of her world-view in nonfiction books such as The Virtue of Selfishness and Capitalism: The Unknown Ideal.”

If you look at Ayn Rand’s objectivism, it’s the least romantic and idealist of any political or social philosophy known to man, because it’s all about reason and the individual.

It’s also the least flattering, because you wouldn’t hear Ayn or one of her followers say something nice to someone just to be nice: you’re not going to hear a Randian say: “this is the best meal that I’ve ever had in my life.” Especially when you only served them meatloaf and mashed potatoes. No offense to meatloaf and mashed potatoes, a meal I’m a big fan of, but if you had dinner at a great Italian or French restaurant, or a great American steakhouse or some place like that, you’re not going to say under oath at least: “that meatloaf and mashed potato meal, is the best meal I’ve ever had in my life.” If you’re trying to kiss your boss’s wife ass or something like that, then maybe you would do that. Or you might say that was the best meal that if you ever had in jail or in a hospital, or some cafeteria. And you might sound like you’re joking, but you would be honest and even truthful.

So objectivism like liberalism, ( in the classic and real sense ) or conservative-libertarianism, or left-libertarianism, anarcho-libertarianism, are all based around the individual and that people should be in charge of themselves and accountable to themselves. That people should make their own decisions and then be held accountable ( for good and bad ) for their own decisions. Not talking about an anarcbo society where there are no rules and people are free to abuse innocent people, but where people are free to make their own decisions in life, ( short of hurting innocent people with what they’re doing ) where individualism, freedom, and even selfishness aren’t just tolerated, but even encouraged under objectivism.

So why do Leftists and Rightists hate Ayn Rand?

I’m not gong to get into Far-Left or Far-Right here even in an American political spectrum sense, because people who are Far-Left in America, would be called Center-Left in a lot of European states. And people who could be called Far-Right in America, would be considered Center-Right in most of if not the entire Middle East, but I’ll explain why Socialists ( regardless of the Socialist faction ) and why let’s call them Christian-Conservatives or Religious-Conservatives, people who in America are now called Christian-Nationalists and in the Middle East would be Islamists, hate Ayn Rand and her philosophy of objectivism.

If you’re a Socialist, objectivism or Randianism is like the Devil to you: ( assuming you’re not a Communist ) because it represents everything that you hate about individualism and individual freedom, especially economic freedom with the belief that people who make a lot of money, should not only be allowed to make a lot of money, but then be able to keep most of that money to spend as they please, even while you have people in poverty.

If you’re on the Christian-Right or you’re a Nationalist, Ayn Rand is the Devil to you because of her social philosophy that people should be free to make their own decisions in life and not be forced to conform to someone else’s view of morality. And that government shouldn’t be able to force people to live a certain way and that people should live any lifestyle that they want and not be forced to live a certain way. And that women shouldn’t be forced too served under men and be servants to men, that everyone is equal regardless of race, ethnicity, gender, or religion. If you’re a Christian-Nationalist, ( let’s say ) you obviously have big issues not with this hardcore individualism, but that no one is superior or inferior to anyone based on their social class or culture.

What Socialists, Christian-Nationalists. and Islamists have in common is that they’re all collectivists: right-collectivists come at their view of collectivism from a fundamentalist ( if not warped view ( of their religion. Socialists, come at their collectivism based on their view of government and have a very romantic or idealist ( if not warped ) view of what government can do for people, if it just has the money and resources provide those services for everyone.

So of course collectivists ( left or right ) are going to have real issues with objectivism or any other philosophy that’s based on individualism and individual freedom, because they believe individualism leads to inequality or immorality. And you need a central government big enough to prevent inequality and immorality from happening. Which is why collectivists ( left and right ) hate Ayn Rand, because of her belief in the individual, even over government.