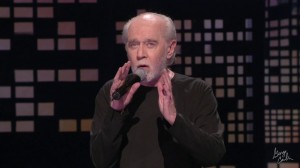 Warning! This piece might contain language that may offend people who are still living in the 1950s and forgot to move with the times in America as the rest of country moved forward without them.

Not that I would ever tell George C to watch his fucking language, because someone like that who is generally that angry not just at people, but basically an entire country, probably wouldn’t like that humor and perhaps not have even understood it. But he might have grasped the hypocrisy from a statement like that.

But America might have more than our share of stupid people especially with a region of the country that values their religion over education and knowledge. That alone can create a lot of problems there when people who simply don’t respect knowledge and think Jesus or whoever they pray to is all they need. That alone would qualify as stupid thinking, or lack of thinking.

See, people who don’t have knowledge tend to be stupid. Knowledgable people tend to be intelligent. The actual definition of intelligent is someone who is having or showing intelligence, especially at a high level. The actually definition of stupid, is having or showing a great lack of intelligence or common sense. Someone who takes America to war over bogus (to be overly generous ) evidence that never existed in the first place, is the classic definition of s stupid decision. Making a decision on no real evidence and information.

Buying stuff (or in many cases junk ) that you simply don’t need and are buying it perhaps only because it’s a status symbol for you like buying that latest smartphone simply because it’s the latest smartphone, even though you bought the latest smartphone last week, would qualify as a stupid decision. Even if it did allow you to be one of the first five people to share that latest purchase on Facebook, Twitter, or perhaps my favorite Google+. Sure! That decision made you look like totally awesome (or whatever ) for an entire five minutes. But now you have two smartphones that you’re not using and still paying for both of them.

When you have a country that is as vast and diverse from all sorts of vantage points and not just racially and ethnically, a country that is also as free and individualistic as we are (at least outside of pop culture, where most people look like a clone of the latest hot celebrity ) and then you have an entire population that values their religious and cultural beliefs over knowledge, reason, and science, you’re going to have a lot of stupid people.

America has a lot of people who are literally free to do whatever they want short of hurting innocent people, including deciding to not be educated and not believe evidence and facts. This is why America at times at least can look like a national morons convention where everyone is late, because everyone went to the wrong place for the convention.