Sargon of Akkad: Communists At Berkeley

Posted on November 8, 2017 by Ederik Schneider 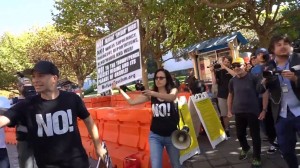 ANTIFA if they really were an anti-fascist movement, then I could probably respect them. But they’re instead a hypocritical contradiction of a movement. They claim to be against fascism on the one hand, while on the other hand they try to shut up and stop speech that they simply disagree with and are even offended by it. Which is basically the definition of fascism. Preventing speakers that you disagree with from speaking and trying to physically stop if necessary speakers that you don’t like and disagree with from speaking. ANTIFA are not anti-fascists, but Neo-Communists if not just pure Communists, who want to destroy the American system and form of government and replace it with a socialist state by any means necessary as the woman in the video proudly stated.

Sargon of Akkad: Communists At Berkeley