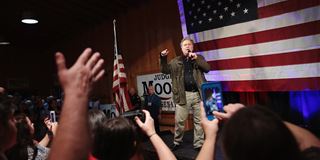 If I look at Donald Trump’s rise to power completely honestly and objectively and not as a partisan Democratic hack, which I’m not anyway, but if I look at his rise as simply as an objective political analyst, I don’t see him personally as a threat to democracy, even liberal democracy. So that would be one area where I believe I disagree with Evan McMullin. (2016 Conservative Independent presidential candidate and founder of Standup Republic)

Now, if I were to look at his Trump’s rise as a partisan Democratic hack I might be saying things like, “Donald Trump’s rise is a threat to everything we hold dear as Americans. Civil rights laws, checks and balances, equal rights, equal opportunity, social safety net, etc,!” But thats not my job as someone who is only registered as a Democrat, but doesn’t officially work for the Democratic Party and doesn’t have to go on cable TV news and everyday and night saying things I simply don’t believe, or leaving out important facts, simply to help Democrats and hurt Republicans. Something that is way too common on cable news today from the big three cable news networks from both Democratic and Republican political analysts.

I don’t even see Donald Trump’s movement as a threat to liberal democracy which is more important to me than just democracy. Even though the National-Right in America which is essentially the blue-collar Christian-Right wing of the Tea Party from 2011-12, have very illiberal and fascists tendencies and don’t believe people who disagree with them have the same constitutional rights as they do. Who believe the Trump Administration should be regulating news organizations that write and produce critical pieces and stories about Donald Trump and his allies. Don’t get me wrong, these people are scary and should be opposed at every opportunity.

But again, where I separate from the Even McMullin’s of the world is how much power the Nationalist-Right actually has in America. As we’re seeing with even a Republican Congress and a Trump appointed Justice Department, is how our form of government that was created by our Founding Fathers (our Founding Liberals) is supposed to work.

Probably even a majority of Congressional Republicans both in the House and Senate, especially in the Senate, believe the Russia story is a big deal. Which is why there are now three Congressional committee investigations into it which includes the 2016 Trump Campaign. House Intelligence, Senate Intelligence, and Senate Judiciary, looking at any possible involvement that they may have had wth Russia and the Putin Administration last year. As well as a Deputy Attorney (Rod Rosenstein) appointed by President Trump, overseeing a Justice Department investigation into Russia and 2016. The Deputy Attorney General appointing a special counsel (Robert Mueller) to conduct an independent investigation.

Our system is destined so even if you have a populist with nationalistic and even authoritarian learnings, come into power in the White House who believes the job of his Administration is simply to serve and protect him, that there’s a system in place simply designed to serve the people. Even if that means looking into things and people that could hurt the President and his Administration. Our Federal Government which includes not just the Administration, but Congress and the judiciary, are functioning the way they’re supposed to which is why someone even like Donald Trump, can’t become a dictator because he has to many layers of checks and people to say no to him and that you can’t do this or that, to prevent him from becoming a dictator.

Again, I’m not a fan of the Nationalist-Right and I’m offended as an American every time that our President tries to appease them and try to keep them with him, because he actually believes he needs their political support to stay in power. Something that President George W. Bush, his father and President Reagan, would have never even had considered .

Whether its the Steve Bannon folks who probably aren’t racists and ethno-Nationalists, but just ideological Nationalists, or the Neo-Nazis who are racial and ethno-Nationalists. But even if these people command as much as 30% of the Republican Party base, you’re only talking about 20-25 of the American electorate and that includes the racist terrorists, as well as the blue-collar Nationalists who aren’t racists, but believe their form of America is disappearing which is why they don’t like immigration. And even if these people do come to power in America we again have this beautifully designed system of checks and balances that prevents them from turning America into some type of authoritarian fascist state. 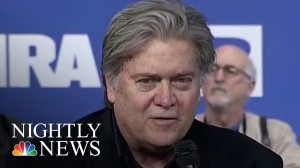