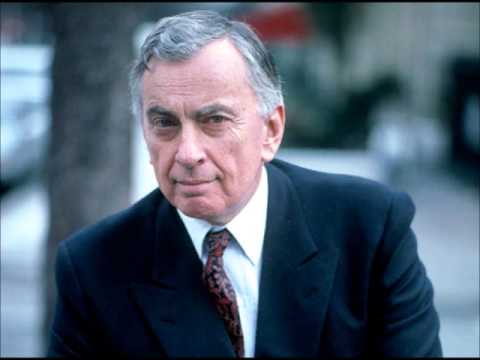 Source:The Nation– Gore Vidal, speaking to The Nation Magazine, in 1990.

“The two parties, which are really one party, cannot be put to use. They are the country’s ownership made carnival. Can the united action of individual citizens regain some control over government? I think so. But it won’t be easy, to riot in understatement. Attempts to cut back the war budget — whether the war be against communism or drugs or us — will be fought with great resourcefulness. When challenged with the billions of dollars wasted or stolen from the Pentagon, the establishment politician’s answer is clear: Abortion is against God’s law. He promptly changes the subject, the way a magician does when he catches your attention with one hand while the other picks your pocket…

From The Bully Pulpit

I believe to listen to Gore Vidal speak or read any of his material, you first have to know where he’s coming from and what his political background is. He doesn’t view individual rights and freedom like most Americans do. He has more of a social democratic or democratic socialist approach to how looks at politics, rights, and freedom. He was as far to the left as Henry Wallace who ran for President for the Progressive Party back in 1948, Senator George McGovern, who ran for President three times for the Democratic Party, or Senator Bernie Sanders today.

So when Gore Vidal talks about rights and freedom, he means the right not to go without the basic essentials in life.

The right not to starve.

The right not to want.

The right to health care and health insurance.

The right to housing.

The right to work if someone chooses too, but that work shouldn’t be required even for people who are mentally and physically able.

And for people who literally choose not to work in order to support themselves, those people are also entitled to the same rights that I just mentioned.

The rights that President Franklin Roosevelt proposed in 1944 in his second Bill of Rights speech. What would be called today welfare rights and perhaps back then as well. The rights for people to be taken care of instead of everyone going out there and making their own  way in life and creating their own individual freedom for themselves. Which is very different from what the Founding Fathers created for America even though they didn’t tend individual rights for all Americans and not just Englishmen of wealth. Those individual rights that all Americans have regardless of their race, ethnicity, or gender, apply to all Americans because that is how the Founding Fathers (Founding Liberals, really) wrote our Bill of Rights.

All what was consistent with Gore Vidal and is also consistent with the Socialist-Left today that Noam Chomsky and others argue, is that America doesn’t even have a two-party system, let alone a multiple party system. That we have a one-system that has people called Democrats and others called Republicans. Who are both controlled by big business in America and the National Security State.

Gore was somewhat conspiratorial to say the least. And even though he was a helluva lot smarter than your everyday JFK assassination conspiracy theorist and a very intelligent and funny man in general, but he had his own conspiracy theories as well.