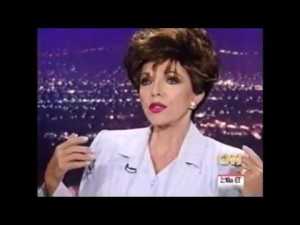 As far as Frank Sinatra. When you’re worth hundreds of millions of dollars which is probably what Frank Sinatra was worth in today’s money back in the 1950s and 1960s, you don’t believe you live on top of the world. You believe you own the world and that anything you want you just get by asking or ordering it. You meet and work with a beautiful adorable brunette like Joan Collins with a great sense of humor and decide you want to have dinner with her that night. Why would the fact that you are currently in Hamburg Germany and Joan is probably 1000 miles or so away in England get in the way with you getting together with her that night?

You own your own plane and can just send it to her and pick her up and fly her back to Germany where you’re currently working. You’re not just perhaps the most popular singer in the world, but you’re a Hollywood star in films. Why would the fact that Joan Collins has an early call the next morning affect whether you two can get together that night? You just call your friend at Joan’s studio where she’s working for and tell him that she will be late the next morning because she’s having dinner with you in Germany.

That is how Frank Sinatra was probably thinking back then and what Joan did according to this interview was turn him down. And as Joan put it Frank Sinatra didn’t handle rejection real well because he wasn’t accustomed to being rejected. I mean rejecting Frank Sinatra could cost you. Jack and Bobby Kennedy rejected Frank in the early 60s by not going out to his home in California and instead going to Bing Crosby’s on a trip out there and Frank never forgave Bobby for that.

As far as Mae West. Joan Collins has this famous quote that age is just a number. If I had to guess I would say that quote is actually Mae West’s quote. Myra Breckinridge which was originally written by Gore Vidal comes out as a film in 1970 with Raquel Welch playing Myra and Mae West is in that movie. She’s already in her eighties at that point and could’ve actually been Frank Sinatra’a mother as far as years, perhaps Joan Collins grandmother and yet she’s still performing and singing in that movie and playing a sex goddess who wants to bring young sexy men up to her penthouse. The woman has a bed in her office in that movie. A woman who is already in her eighties.

As far as Marilyn Monroe. Joan is obviously right that gorgeous blondes aren’t taken seriously in Hollywood. Nothing new to report there. Lauren Bacall and Ingrid Bergman would be exceptions to that because they both showed early on in their careers that they had to be taken seriously and it would cost the studios money if they weren’t taken seriously, because those two women were both very intelligent and knew how to take care of themselves and how the business worked and what they were worth and meant to the movie industry. Marilyn Monroe wasn’t a dumb blonde, but was certainly immature and overly adorable both in appearance and personality and was probably used and taken advantage of as a result. And treated like a little girl.