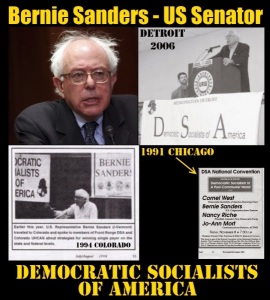 The main point I get from Paul Starr’s column are the differences between socialism and liberalism. And they’re not the same thing whether you’re talking about communism which of course is different from liberalism. Because liberalism is based on individual rights and equality of opportunity. Communism is based on the collective and what is best is for everyone in society generally. Or democratic socialism which again is based on the collective, but through democratic means. Instead of having the state completely in control of society.

Hillary Clinton actually gave a great definition of what economic liberalism is at the South Carolina townhall on Tuesday. Where she said she wants an economy where everyone can succeed and make the most out of their potential and be able to enjoy the rewards of that. I’m paraphrasing here, but that is very close. Socialists again are interested in welfare rights and the collective. An economy where no one has to go without the necessities to live well in life and where no one who works should have to live in poverty. Socialists aren’t so much interested in individual opportunity, as they are economic equality where everyone is the same and no one is rich or poor. Because they believe individual freedom leads to income inequality and people becoming super rich and they see that as bad things.

What Bernie Sanders wants to do is apply the Scandinavian economic model to the United States. The whole region of Scandinavia is roughly twenty-five-million people. With a lot of land and a lot of natural resources, including resources that Social Democrats tend not to be in favor of like oil and gas. And they invest heavily in those resources and use them to finance their welfare states. Along with high income and consumption taxes, but as Paul Starr said low taxes on capital and business, trade. Senator Sanders wants to bring the Scandinavian model of taxation and welfare, to a country of three-hundred-twenty-million people that still imports oil and gas to power this huge country. But have taxes in general much higher than Nordic Socialists would ever even dream of.

Socialists are interested in Utopia and creating some perfect world where there’s no such things as sickness, poverty, war, bigotry, crime, etc. Liberals want the real world to work for as many people as humanly possible. And for everyone to be able to live their own dream in life and be productive and live in freedom. Quality education and infrastructure for all. a tax system that encourages economic success, a safety net that empower people to get on their feet and not to live off of taxpayers indefinitely, a regulatory state that protects workers and consumers, as well as business’s from predators. But doesn’t try to protect people from themselves. Which is why Liberals are still Center-Left in America, but Center-Right in Europe and other places. While Socialists are still considered Far-Left in America. Because of their heavy reliance on central planning and central government.