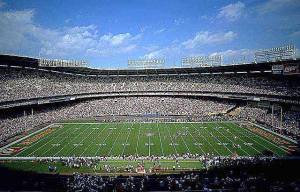 Source: The Daily Review Plus– RFK Stadium- former and perhaps future home of the Redskins

I’m not an architect obviously, but one of the great things about RFK Stadium is that it wouldn’t have to be torn down. It is on a great property and piece of land and what the Redskins are flirting with right now is simply renovating it, or rebuilding it. But knocking out the skyboxes and press box level and the upper deck. Leaving in the lower bowl with those flexible seats that go up and down and then adding new decks of seats on top of the lower bowl and building a much larger stadium. Somewhere ninety-thousand seats or so, because Washington is big wealthy city in a huge wealthy market that loves their Redskins even when they’re losing. The future of the Redskins is not in Landover, or North Virginia, but in downtown Washington at the new RFK which would be right at where the current RFK is.

Worst case scenario, the city knocks down the current RFK, but rebuilds a new one on the same site, but that has about twice as many seats and perhaps a retractable roof on top and bring the Super Bowl to the nation’s capital for the first time ever. Which is long overdue considering how great a city market this is. Which the new RFK hosting college football and even bowl games, perhaps even bowl playoff games, perhaps the Maryland Terrapins would play Navy and Virginia every year. Maybe Penn State every other year. As well as a lot of other events during the NFL offseason to keep the money coming into this new huge stadium. That could become the best downtown big city football stadium in America and give Washington something New York doesn’t have. Which is a downtown NFL stadium to call its own.

I’m lucky being born and growing up watching football when I did. Because I remember all three Super Bowl Championships the Redskins won, plus the one they lost to the Los Angeles Raiders. So I know RFK Stadium very well and how much it has meant to this great franchise. Where it was probably the toughest place to win a road game at least in the NFC East in the 1980s, if not the NFC and NFL as well. Because Washington sports fans are so loyal to their winners and so crazy when the Redskins win to the point that opposing head coach has to ask the referee to tell the fans to shut up so his team can hear the plays and be able to talk to his team. That has been missing ever since the Redskins left RFK for Landover, but is something that the Redskins and should bring back. And be used to return the Redskins back to being an annual winner and championship contender. Which is where Washington expects the Redskins to be.
RFK Stadium: Past, Present, Future?