Prager U: Jonah Goldberg- ‘What is Social Justice?’ 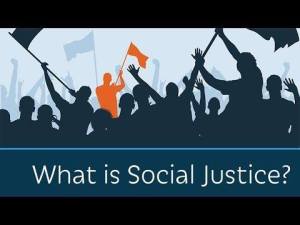 “Social Justice” is a term you hear almost every day. But did you ever hear anybody define what it actually means? Jonah Goldberg of the American Enterprise Institute tries to pin this catchall phrase to the wall. In doing so, he exposes the not-so-hidden agenda of those who use it. What sounds so caring and noble turns out to be something very different.”

From this video all you hear is Jonah Goldberg’s definition of social justice. So take it for what it is worth, but that is not it.

Social justice, or term I prefer as an actual Liberal and not Jonah Goldberg’s week-long drinking binge’s idea of a Liberal, is purely economic freedom. A society where everyone can do well and live in freedom. Where poverty is almost not recognizable, because everyone regardless of their income level has an opportunity to get a good education and get themselves the skills that they need to get a good job and live well in freedom. Perhaps even start their own successful business, or manage one. Not have to live off of public assistance whether they are working or not, because they have a good job that allows for them to comfortably take care of themselves.

Jonah Goldberg’s idea of social justice is what you hear in the video: Big government with both of its paws stuck down the rich man’s wallet and in their bank accounts to take from him to take care of people who struggle just to eat everyday and feed their kids at the same time and avoid being evicted from their public housing unit. But again that is not it.

What I’m talking about what President Clinton called an Opportunity Society. Not some Socialist Utopian Society, where government take cares of everyone, but an Opportunity Society where everyone can live well. Because every kid can go to a good school and for the low-skilled low-income workers and opportunity for them to complete and further their education. So they can get off of public assistance and live well in life with a good job.

Conservatives and Libertarians, love to talk about redistribution of wealth. Perhaps as much as Socialists like to talk about tax the rich. But the only way government can exist is by redistributing wealth. Unless you want to live in a Marxist State where government owns all forms of enterprise. You won’t see many hands go up in the air when you ask: “Who wants to live in a Marxist State?” Not even Bernie Sanders and at least some of his followers.

So of course government is going to redistribute wealth and the question is how. One way to do that is to tax people in Atlanta to pay for a highway in St. Louis, or tax St. Louis to pay for a military base in San Diego.

When it comes to social justice the way to do that is to tax people who are doing well to pay for good schools in low-income communities. Or to give low-income workers and people on Welfare the ability to go back to school and finish their education and get themselves a good job. Night school, community college, private and public job training programs. So they can live in economic freedom as well. Which saves money for your public assistance budget, because you have fewer people who actually need public assistance at all.

Social justice, is an Opportunity Society where everyone can do well. Not a Socialist Utopian Society, where government takes care of everyone.