ESPN: An Audience With Muhammad Ali- From 1974 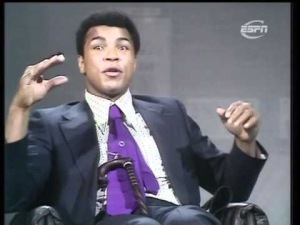 The Greatest Performer of All-Time?

Source: ESPN: An Audience With Muhammad Ali- From 1974

Muhammad Ali, perhaps at his most popular and highest peak professionally in 1974. Now seemed more as a mainstream figure and perhaps less as a rebel, or some Black Power figure or something. He’s not the most recognizable and most popular athlete in the world forty-years ago and today just because African-Americans, Native-Africans and Muslims regardless of race, or ethnicity love him. He became more of a mainstream figure in the mid 1970s as more Americans especially got to know him, but he moderated as well and said less derogatory things about Caucasians and the establishment. And more people got to see how intelligent and the great comedic wit and acting ability that he had as well.

Muhammad, was certainly a member of the TV Generation and was perfect for it and came up during the perfect time for him. That is why he’s so famous, because he came up when network TV was so crucial and dominant and had the perfect personality for it. Someone who was very bright and knew exactly what he was talking about, but also someone who was very funny and entertaining and people simply loved him and still do for it. This is in late 1974 and he Muhammad fought Joe Frazier for the third and final time about a year later. And you hear Ali talking about Frazier, because that is the fight people wanted to see again. And Smokin Joe wanted another shot at Ali and regain the World Heavyweight Championship. And Ali probably wanted to beat Joe Frazier again.

Muhammad Ali as a politician? I hate to do this as a great of an athlete and in many ways as a man he was, I could see him as the Donald Trump of the 1970s or 80s had he not come down from Parkinson’s. As he said himself as a non-politician he was free to say whatever he feels and believes and even the truth. You can’t do that as a politician and expect to be reelected. You have to be more careful and target what you say and how you say it. One of the reasons why Donald Trump has never been elected to anything is because he’s unelectable. He’s done the best Mitt Romney impersonation you’ll ever see by being multiple choice on so many key issues. Muhammad was always better off being free and out of elected office and being exactly who he was. Not feeling the need to have to please people.

Blogs primarily about current affairs and history. But also blogs about sports, Hollywood and Hollywood history.
View all posts by Kire Schneider →
This entry was posted in Ali Films and tagged An Audience With Muhammad Ali, Britain, England, ESPN, Muhammad Ali, The 1970s, The Greatest of All-Time, United Kingdom, World Heavyweight Championship. Bookmark the permalink.