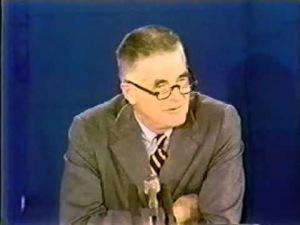 I believe President Richard Nixon’s firing of Watergate Special Prosecutor Archibald, was essentially an admission of guilt. That whatever credibility that President Nixon had left in this affair was now gone. Because the President was essentially telling the country that Cox and his staff are on to something and they better stop him before the Cox team finds out what happened here. The Cox office was put together by President Nixon’s Attorney General Elliot Richardson to find out what happened in Watergate.

The Cox Special Prosecutor’s offices, was not put together to bring down President Nixon and his administration. Richard Nixon and his team with their behavior and that Nixon recorded what he did and who he talked to, brought himself down. The Cox office was responsible to investigate crimes that President Nixon originally had nothing to do with. The break in of Democratic Headquarters in Washington in 1972. But if Watergate breaks, then so would other criminal activities that the White House was also involved in. Because people would have talked to save themselves.

The Nixon White House knew that the people who actually did the Watergate burglary, had real evidence and information that could be used against the White House in other matters to save themselves. That they had connections with people who were involved in other criminal activities of the Nixon White House as they had to do with other break ins. That is the main reason that Nixon wanted Cox shut down. I believe the White House knew that Cox and his team would not just find out about what happened during Watergate, but perhaps about the other activities like the plumbers unit.

The plumbers did other break ins to find out information about Nixon opponents. Like Daniel Elsberg and people in the national media. The Watergate break in, really was a third-rate burglary by high school drunks who couldn’t find anything better to do on a Saturday night. And decided to break in to the Watergate Hotel. (Or so it seems) But if Watergate broke, then so would other illegal activities that the Nixon White House was also involved in. And the White House couldn’t afford that.