Rick Cooley: ‘No Nukes’- Only Through Multi-Lateral Disarmament 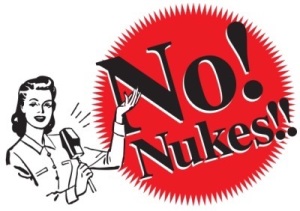 Before we talk about eliminating nuclear weapons from the face of the Earth, which I would go along with as long as it’s not just the United States that does that, but everyone else involved who currently has nuclear weapons, or is trying to develop them, lets first lay out who currently has nuclear weapons. This should be very helpful for people who are lets says a bit left of center and not quite center-left in America. Social Democrats who tend to be against the use of force, well for anything at least as it relates to governmental policy.

America, Britain, France, Russia, Israel, China, India, Pakistan and North Korea, all currently not just have nuclear power, but own nuclear weapons. Brazil, Japan and South Korea, have considered getting nuclear weapons. Iran, would like to have them. Libya, Iraq and South Africa, gave them up, or they were taken away from them. Two of the countries that are on the current nuclear weapons list are social democracies and tend to be a bit left of center politically than the United States. Britain and France.

Yes Britain and France that are two of most social democratic countries in the world when it comes to their form of government and economic systems. And yet they both use nuclear power for their energy needs and for their national security. Nuclear power, something that Social Democrats at least in America, are not fans of to say the least and would want to see outlawed in this country. See, most countries at least in the developed world, tend to look at foreign affairs and national security from a real-world perspective. It’s great to live in Utopia and be govern by idealism on Fantasy Island. But when you live in the real-world where most of the rest of us live, you have to do what it takes to defend yourself from the worst possible threats.

Nuclear weapons and nuclear power, at least from democratic oriented countries are not intended to destroy other countries and kill people. And people can throw Japan and the nuclear bomb being dropped by America there all that they want. But the facts are we did that to end that war. To prevent a hundred-thousand America soldiers from being murdered in the next battle there. And whoever coined the phrase war is hell, sure as hell knew what they were talking about and probably experienced some of that hell for them self. What that means is that in war sometimes you have to do things that come with horrible consequences to prevent worst things from happening. Like your own people being killed.

Nuclear weapons, again when they are possessed by democratic countries are designed for self-defense. But more importantly they are designed for preëmptive defense. “You don’t want to hit us, because we can blow you away if you do.” Again America, hit Japan with the bomb in World War II, but no other power with nuclear weapons has used them since. Because no one has been dumb, or crazy enough to call that play yet, because they know what will happen in response. When all the other nuclear powers come to the table and say, “we’re ready to give up our nuclear weapons and we’ll stop making them if you do the same.” Then the United States will be ready to do the same thing. As we should, because of horrible consequences that come from using nuclear weapons.
Secular Talk: Deal- No Nukes For Iran & Regular Inspections

1 Response to Rick Cooley: ‘No Nukes’- Only Through Multi-Lateral Disarmament