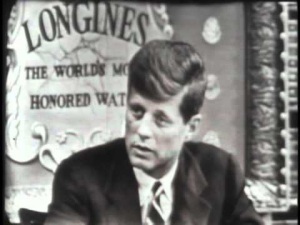 Source:Public Resource– U.S. Representative John F. Kennedy (Democrat, Massachusetts) on The Longines Chronoscope, in 1952. He was in the House but running for the Senate, against Senator Henry Cabot Lodge.

Jack Kennedy, was only thirty-five at this point and would become one of the youngest people ever elected to the U.S. Senate at thirty-five. JFK, served a total of fourteen-years in Congress (both in the House and Senate) and yet he was forty-three when he left Congress for the presidency in 1961. He is someone who wanted to move up quickly in American politics and not stay in one office for very long.

The House, was too small of a platform especially if your last name is Kennedy. So it’s a little hard to believe that JFK would’ve been someone who would’ve spent 20-30 years in the House even if it meant being Chairman of the Foreign Affairs Committee, or serving in the Democratic Leadership.

I think JFK like his brother Ted, would’ve made a terrific U.S. Senator if he wanted it and served four, or five terms in the Senate after the House and completed his Congressional service and even public service in the Senate. And perhaps would’ve ended up chairing a couple of committees and maybe even becoming Democratic Leader in the Senate.

Jack Kennedy, didn’t have a very good record in the House. He was bored there and had a hard time dealing with being one of 435 Representatives there and a back bencher at that. And wasn’t a very serious Representative who missed a lot of floor votes and committee hearings and not known for passing any legislation.

JFK wasn’t much better as a Senator at least in his first term. But he writes a book Profiles in Courage in 1956, he marries Jacqueline Kennedy and his name is always in the news and starts to draw a serious following in the Democratic Party and becomes serious as a U.S. Senator. Which is how his name starts to get floated around as a possible presidential candidate. Who almost becomes Adlai Stevenson’s vice presidential nominee in 1956. And after that he when he puts most of his focus into becoming President of the United States.