Huffington Post: Opinion- David Woolner- Seeking The Four Freedoms is as Important Today as it Was 74 Years Ago 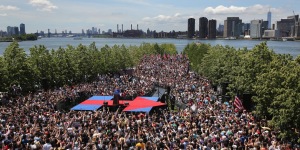 Huffington Post: Opinion- David Woolner- Seeking The Four Freedoms Is as Important Today as It Was 74 Years Ago

If today’s so-called Progressives, believe that Hillary Clinton is going to run for President as the female Bernie Sanders and the other self-described Democratic Socialist, or even as an FDR Progressive, to quote the heavy metal band Judas Priest, which I’m not a fan of and especially heavy metal, they have another thing coming. Hillary, will speak to Democratic economic concerns and the broader economic concerns of the country and even offer policies to address those concerns. But don’t expect some expansion of the New Deal or a Swedish welfare state. Other than new infrastructure investment job training for displaced, unemployed and low-skilled low-income workers.

Center-Left Democrats, which is Hillary Clinton is one, should be all about freedom and pushing for it and that includes economic freedom. But we need to be more clever and go even further and put more thought into how we accomplish it. Instead of being about individual rights and trying to out socialist Socialists and what government can do for people and how government can take care of people, we should be about individual rights. And what government can do for people who are struggling to move ahead, or even keep current pace, to be able to move forward on their own and achieve economic freedom for themselves by empowering them to improve their own skills. And encouraging more economic, especially small business development. Even for people who are current unemployed or underemployed.

Democrats, could expand economic freedom, by first getting elected and getting reelected. But to do that, by talking to Americans who are struggling regardless of race, ethnicity, or gender, that they have a plan to help them get ahead. Improve their skills through further education and job training, including college. Infrastructure investment for underserved communities. Small business expansion and even cooperatives for workers who are struggling to move ahead and give them the opportunity to become successful small business owners. But if Democrats talk about how big government can take care of you, if we just give them more money and not have to do things for ourselves, it will be 1972 George McGovern again. Because Americans, are still a people that like to move ahead, live in freedom and be able to take care of themselves.

1 Response to Huffington Post: Opinion- David Woolner- Seeking The Four Freedoms is as Important Today as it Was 74 Years Ago