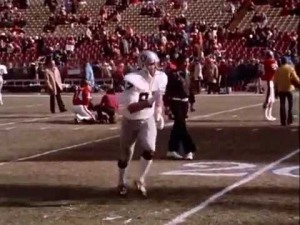 With all due respect to the 1977 Denver Broncos, even though this game was played in Denver, this is one of the biggest upsets in NFC conference final history. If you look at the two teams and the two squads, the Raiders clearly had a better team man for man and as far as talent. The Broncos might not even had a single Pro Bowler on offense. The Raiders had four Hall of Famers on offense alone. OT Art Shell, OG Gene Upshaw, WR Fred Biletnikoff and TE Dave Casper. Arguably and I believe the best all around TE of all-time. The Raiders should have at least two other Hall of Famers on offense. QB Ken Stabler and WR Cliff Branch.

What the Broncos had in 1977 and really all the way even perhaps through the Dan Reeves era in the 1980s, but defensively not as good, was a great defense. Especially their linebackers, in Randy Gradishar, who should be in the Hall of Fame. Tom Jackson, Bob Swenson and Joe Rizzo. And Pro Bowler DL Paul Smith, Barney Chavous, Pro Bowler Lyle Alzado, who should probably get consideration for the Hall of Fame. NT Rubin Carter, who was a stud in the middle. Which you must have in order to play a 3-4. Louis Wright and Steve Foley in the secondary. They didn’t need a lot of talent on offense, because they didn’t need to score a lot of points. They only gave up ten points a game.

Going into this game, you would have to think the Raiders simply because they had a very good if not great all around team and the defending Super Bowl champions, would be the clear favorite in this game. Great quarterback, the best offensive line in football, great running game with Mark Van Egan and Clarence Davis. Great receivers and one of the best defenses in the NFL. That this would be the year we finally got to see the Oakland Raiders and Dallas Cowboys in the Super Bowl. Which would’ve been a classic in 1977, but the Broncos defense could shut anyone down. And then score enough points to win the game. And you can see it for yourself.