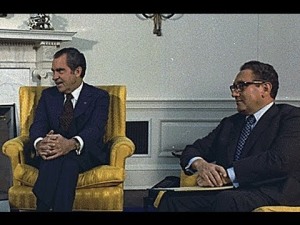 The Far-Left in America both see Richard Nixon and Henry Kissinger as war criminals. Because of President Nixon’s and his top National Security Adviser Henry Kissinger’s involvement in the Vietnam War. And their involvement with Far-Left Marxist dictators in Latin America and trying to even oust them. Not saying what Sey Hersh says about President Nixon and Secretary Kissinger was wrong, or all of it was wrong. But you at the very least have to take that into account when you hear Sey Hersh and his colleagues talk about Nixon and Kissinger. And know that what they are going to say about those two men are of course going to be negative. And to be made to look as negative as possible about those two men.

Now from my perspective and I’m a Center-Left Liberal Democrat, I improvise Center-Left because that is where Liberals are on the American political spectrum. And we are not always against the use of force and we aren’t anti-military. Unlike the Far-Left in America who would probably dissolve the military if they could. And having said all of that I consider President Nixon to be our best foreign policy President at least going back to Dwight Eisenhower and Harry Truman and FDR. No one new foreign policy and national security as a President better than Dick Nixon. And I consider Henry Kissinger to be our best Secretary State of all-time. If not Kissinger, then it would be George Schultz. Even though they are both Conservative Republicans.

And I say that, because Nixon and Kissinger saw things back in the early 1970s that most if not the rest of the country couldn’t see for another twenty-years. The ending of the Soviet Union for one and a point where America and China if not allies would at least not just be communicating with each other, but even working with each other on key issues. They both also saw China as a future world power and economic power. China now has the second largest economy in the world and one of the best militaries as well. They saw things that no one else could which is why they ran their foreign policy the way they did. That you talk to your enemies to encourage them to behave.

Dick Nixon and Henry Kissinger both have their vaults of secrets that we’ll never know everything that they did exactly acting as representatives of the United States. In the President’s case, both extra legal and illegal like with the way he ran his White House to use as an example. But you can’t deny what they both accomplished when it came to foreign policy and doing things that no one else could’ve done at least when they did them. Like opening up the Soviet Union and People’s Republic of China in 1971. To the point that America and China had an official relationship by the late 1970s. And these are things that you don’t hear from people who simply dislike Nixon and Kissinger if not hate them.

1 Response to The Film Archives: ‘The Dark Side of Richard Nixon & Henry Kissinger’- Seymour Hersh 1983 Interview