AlterNet: Opinion- David Masciotra- “You’re Not The Boss of Me! Why Libertarianism Is a Childish Sham”: Why Collectivism Doesn’t Work Either 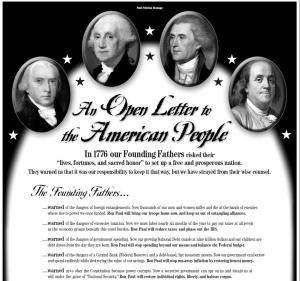 Source: AlterNet: Opinion- David Masciotra- You’re Not The Boss of Me! Why Libertarianism Is a Childish Sham

I actually believe that our Founding Fathers our Founding Liberals (sorry Right-Wingers) got it right when they wrote our Constitution and Bill of Rights with all of our individual rights and freedom and built our liberal democratic state that is America.

Yeah, they didn’t mean of all of those rights and for all Americans to be treated equally under the law. And only intended those rights for Caucasian males who owned property. And for Anglo-Saxon property males at that. But if you’re a true constructionist when it comes to the U.S. Constitution you don’t go by what you believe someone meant to say. Right, you go by the actual text of what they wrote. And based on what the Founding Liberals wrote they created a liberal society where everyone has individual freedom and rights under law. And where all of those rights are supposed to be enforced equally under law.

If I had a choice to being a Libertarian or a Socialist, I would pick Libertarian. Because of the notion of individual liberty over collective equality. But then I would search for a new label or just call myself what ever I wanted based on what I believe. Which is individual liberty for everyone and that everyone should have quality opportunity to do well in life. That no one is guaranteed success and the ability to live well and be taken care of by government. But that we all have the opportunity to build a successful life for ourselves. Based on the right to a quality education and real infrastructure system so that everyone is living in first world America. Instead of having to live in areas that look like third world cities or third world rural areas.

The choice can’t be between a do-nothing government or an American superstate that tries to do everything for everybody at the same time. For one, neither one works in America. And we are much better and smarter than that and with our people and resources have the ability to build a society where everyone can live in freedom. It is just a matter of doing that and you do that with an infrastructure and education system that works for all Americans. So you’re chances of success don’t depend on the economic status of your parents and where you grew up. But instead based on what you did growing up and as an adult with the good opportunities that were in front of you. Most of us would do well in that type of society. Those who don’t would pay themselves for not making responsible decisions with their lives.
Western Civ At TTU: Dr. John Forte- Global Governance vs The Liberal Democratic Nation State

1 Response to AlterNet: Opinion- David Masciotra- “You’re Not The Boss of Me! Why Libertarianism Is a Childish Sham”: Why Collectivism Doesn’t Work Either