Roosevelt Institute: Richard Kirsch- ‘The Politics of Responsibility- Not Envy’ 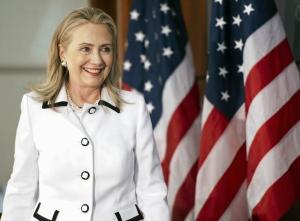 Americans are looking for politicians who ask the wealthy to take responsibility for their fair share of our society.

According to former Treasury Secretary Larry Summers – who is emerging as a key economic advisor to Hillary Clinton – the big political challenge in addressing economic inequality is not to embrace “a politics of envy.”

From the Roosevelt Institute

“Will Hillary Clinton run for president in 2016? Only Bill Clinton knows for sure.”

From Late Night With Seth Meyers

If I was advising for Hillary Clinton, which might be a scary thought for both her and me, because I don’t have a lot of respect for her as a politician, which is a different topic: but if she was interested in running a bold inspirational presidential campaign that could bring in more than just radical feminists who are purely only interested in seeing that the next President is a Democratic female and she asked me for advice in how to do that, I would tell her to go big.

Layout an agenda that is about empowerment especially for America who don’t have it regardless of race and ethnicity by empowering them to take control over their own lives so they can live in freedom with the rest of the country.

Push for universal quality education for everyone so you’re not trapped in a bad school simply because of where you live. Talk about public school choice and even charter schools, even if you have to take on teachers unions.

Talk about a real job training system where all Americans adults whether they are working or can finish their education so they can get a good job. Especially if they are low-skilled or are educated, but need additional skills to get another good job.

Talk about a trillion-dollars or more in new infrastructure investment over 5-10 years including a new National Infrastructure Bank that would acquire private sector funding and investors to finance these projects. And especially dedicate a lot of that funding for underserved areas. And talk about incentives for investors and employers to invest in underserved areas. So they can get the economic development that they need and not have to move to live a good life.

Hillary should go big and talk about an American Freedom For All Agenda. Well that is an opportunity for freedom for all Americans. The responsible people who need that opportunity will take advantage of that and live in freedom. Americans want to hear a presidential candidate who can speak to them and tell them how government can work for them to empower them so they can live in freedom. They are tired of divided politics and divide and conquer. They want a real leader that can inspire them. Hillary, shouldn’t play it safe and run for middle or go for the Far-Left. But instead talk about freedom and opportunity for all and she could win in a landslide.

1 Response to Roosevelt Institute: Richard Kirsch- ‘The Politics of Responsibility- Not Envy’