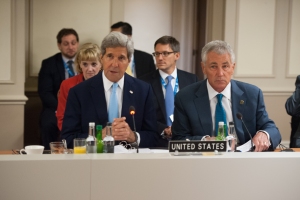 Whenever there’s something horrible going on in the world that America officially comes out against and one way or another works to try to end that and punish the people who are responsible for it, the Far-Left in America however you want to label their politics in America just as long as you don’t label them as Liberals like to say, “hey, what about these horrible things that America did way back when. Either as private citizens or what their government did?”

There’s an easy answer to that, actually two easy answers to that. What does lets say slavery have to use as an example have to do with ISIS beheading innocent people today. And how come you can’t talk about present day and acknowledge the horrible actions of ISIS that most of the world has already done.

You can’t compare ISIS with the bad actions of America, Germany, Britain, Italy, Japan, to use as some examples. No country is innocent when it comes to horrible past behavior. The difference being those countries don’t murder their own people today. They fight against countries and terrorist groups that have. ISIS is in the business of acquiring land in order to establish their so-called Islāmic State. And they’ll murder anyone that they see as a threat to doing that. America at least when it comes to national security and foreign policy is in the business of protecting innocent American lives. And lives of other countries wherever we can help.

The far-left needs to get a real education about history and current affairs and learn that America is not the evil empire. But we are trying to prevent along with our allies another evil empire from emerging. And are we perfect? Of course not, but what other large developed country is when it comes to human rights and everything else.

And just because a country has done some bad things in the past doesn’t mean they can’t acknowledge when others behave bad or even worst in ISIS’s case. What they do instead because they don’t like our military, our constitution, our economic system and everything else that an overwhelming majority of Americans is do whatever they can to make us look bad. And even worst than our enemies.