Posted on February 7, 2015 by Ederik Schneider

“I feel like I do have the dance moves, as long as no one choreographs me and tells me exactly how to dance,” replied Tyra.

She then joked that she was “tempted” to get dance lessons with renowned choreographer Derek Hough ahead of the sequel, adding: “I’m asking you now, Derek. Can you choreograph that for me?”

The original movie (as if you needed reminding!) follows aspiring songwriter Violet Sanford (portrayed by Piper Perabo) as she pursues a music career in New York City.

Working at bar Coyote Ugly to make a little extra cash on the side, Violet is welcomed into a family of all-singing, all-dancing female bar workers.” 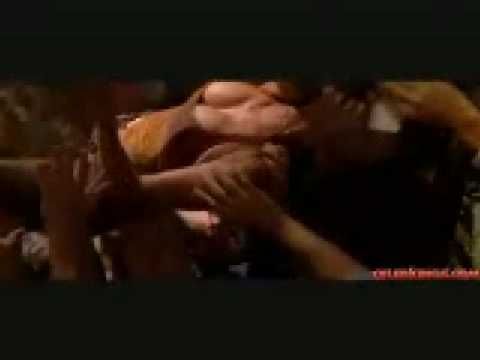 “Trya Banks in Coyote Ugly.” Dancing on the bar. ”

I believe this was the first scene in Coyote Ugly where the bar was open. And Violet played by Piper Perabo walks in for her tryout or audition and sees the women on the bar in action. And she comes from somewhat of a culturally conservative background, which is one of the reasons why she goes to New York and sees these gorgeous sexy women. And Tyra Banks perhaps being the best looking of these women dancing on the bar.

And I’m not saying that Tyra is a great actress, I would argue that she’s not and fairly limited as an actress, but this scene wasn’t so much acting. But sexy women especially Tyra dancing on the bar and she looked as great and did as well as any professional Coyote dancer I believe at the real Coyote bar. And watching her dancing in those tight leather jeans and boots and it is the first scene where you get to see the bar in action, you knew you were watching one hell of a good sexy movie.

You can also see this post at The Action Blog, on WordPress.