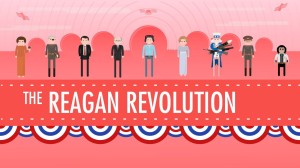 The Reagan Revolution was all possible because of what Barry Goldwater and Richard Nixon were able to build in the 1960s and 70s. Moving right-wing Democrats from the Midwest and South over to the Republican Party. It was sort of the final nail in the coffin to the FDR/LBJ Coalition that included Southern right-wing Democrats, to go along with Northeastern Progressives and organized labor being part of both groups. The Reagan Revolution dominated the South and Midwest, but also did well in the Northeast with people who are called Northeastern Republicans today. People who are economic Conservatives and socially moderate to classically conservative, but do not go along with the Religious-Right on social issues.

That is how a right-winger wins 40 and then forty-nine states in America. You convince the Northeast that you don’t want big government into the private lives of Americans. You convince everyone else that you truly believe in economic freedom. And that appoint people who your Far-Right loves and pretend you are with them on the issues, while actually not really doing anything for them.