Posted on February 1, 2015 by Erik Schneider 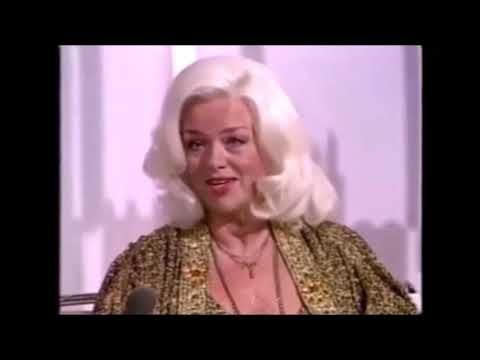 “DIANA DORS APPEARED ON THE LIVE EXTRAVAGANZA COMPERED BY SIR DAVID FROST – END OF THE YEAR SHOW – TRANSMITTED OVER 31 DECEMBER 1983 AND INTO 1 JANUARY 1984.

THIS EDIT IS ONLY DIANA’S BRIEF APPEARANCE AS THERE WERE MANY GUESTS AND ARTISTS APPEARING I ONLY KEPT THIS BRIEF CLIP. SOUND IS AFFECTED BY MY RECORDING. DIANA REFERS TO THE POPE FORGIVING HIS ASSASINATION ATTEMPT. SHE ALSO REFERS TO LIZ TAYLORS LATEST ROMANCE.

THIS WAS TRANSMITTED LIVE AND WAS 4 MONTHS BEFORE DIANA’S DEATH ON 4 MAY 1984. IT WAS NOT THE LAST INTERVIEW OF DIANA. THERE WAS A LATER LONDON WEEKEND CHAT APPEARANCE ON THE 15 JANUARY 1984.”

I think Diana Dors and Denis Norden had the best two lines or really topics in this video. They were talking about Elizabeth Taylor saying that Liz hardly got married in 1983. And Diana adding that Liz is finally in love now. No, really, she’s actually in love this time.

Liz Taylor was a great actress, perhaps the best ever, as well as a beautiful, adorable, very sexy, woman, similar to Diana Dors. But one of the things that Liz was famous for was getting married. Why, because she got married a lot. Sort of like the heavyweight boxing champion who’s been world champion several times. But a big reason for that is because he’s lost the title several times. Well, Liz Taylor lost the title of wife several times and a big reason why she was married six or seven times in her lifetime.