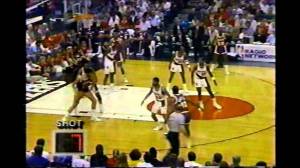 The Lakers and Blazers, clearly the two best teams in the Western Conference in 1991. And the only real threats to deny the Chicago Bulls their first NBA Championship that year as well. The Lakers and Blazers were the only two complete all around teams in the Western Conference. Teams with a good offense and defense, could score in the half court, score in transition, defend in transition and could rebound both offensively and defensively. The Eastern Conference was weak in 1991, with really only the Bulls being a great team that year. SO the only question was really who would the Bulls play in the NBA Finals and would have home court advantage or not. The Lakers were out to prove that they still owned the West and were the team to beat. The Blazers obviously had other ideas.