Source:Zavvi– Al Pacino and Robert DeNiro in the best scene from Heat (1995)

“The camera cuts to two men, sitting across from each other at a table in an American diner, surrounded by the hubbub of the other restaurant guests and staff.

The cups of coffee are barely touched, no food is nibbled on, the pair of men are far too busy trying to understand each other a little better.

And they soon realise that despite the fact they live on opposite sides of the law, that’s actually where the differences between them end.

They are two sides of the same coin, sharing the same understanding, and have a level of respect for one another too.”

“One of the best scenes in any recent movie. Showing that even though people can be on opposite sides of the law or the spectrum they can appreciate each other having similar character traits/qualities. This is from a movie that should be how most movies are made. There is no real bad guy. In the end you have to likable protagonists which is why this movie is so great. You can relate to both main characters. Here is the scene with no score since people didnt really like that. Please like and comment :)” 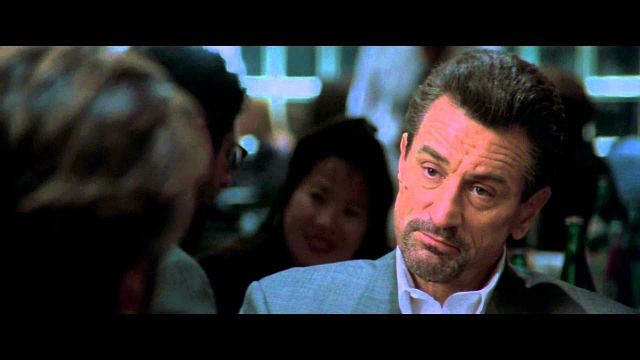 Source:Rob Rash– Robert DeNiro and Al Pacino from the best scene in Heat (1995)

“Master criminal Neil McCauley (Robert De Niro) is trying to control the rogue actions of one of his men, while also planning one last big heist before retiring. Meanwhile, Lieutenant Hanna (Al Pacino) attempts to track down McCauley as he deals with the chaos in his own life, including the infidelity of his wife (Diane Venora) and the mental health of his stepdaughter (Natalie Portman). McCauley and Hanna discover a mutual respect, even as they try to thwart each other’s plans.”

Source:Valid HD– Al Pacino in Robert DeNiro in the best scene from Heat (1995)

“Pop culture junkies are perhaps familiar with the name Chuck Adamson through his television work. In the 1980s, he created the series Crime Story and wrote some episodes of Miami Vice, both of which are examples of some of the finest crime fare to ever grace the small screen. On top of that, he briefly appeared in a few notable film and television projects as an actor, including Thief, Beverly Hills Cop, and The Stand. However, prior to his tenure in the entertainment industry, he was a detective.”

Source:Warner Brothers– Al Pacino and Robert DeNiro in the best scene from Heat (1995)

This is my favorite scene from Heat and this is one of my favorite movies of all-time and a movie that is roughly three-hours long. But think about it for a moment: a three-hour movie that doesn’t seem like three-hours. The same thing with Casino, because it was one major scene after another with either great dialogue like in this scene, or with a great action scene, like the first major robbery of the movie which is in the first scenes of the movie, or the diner scene that’s towards the end of the movie.

You don’t feel like you’re watching a three-hour movie when it is a great movie with one great scene after the other. Just like when you spend three-hours watching a great football or baseball game. Because you want to be there the whole time taking in everything.

It’s the mediocre or bad movies that feel like they’re taking forever and feel like they’ll never end and perhaps you even walk out on that seem to go on forever. Heat doesn’t allow you to do that, because there’s always something very interesting going on in the movie.

And what you see in this scene are two men who are both in charge of what they do and who lead the crews they work for and at the top of their game. And what they are doing here is looking at each other as human beings and getting to the feel for each other and perhaps even liking each other, because they are both being real and who they are. And not trying to come off as anyone else.

Neil McCauley (played by Robert DeNiro) the bank robber who has one big score left in him. Vincent Hanna (played by Al Pacino) the police lieutenant whose job is to stop McCauley and his crew.