Posted on December 13, 2014 by Ederik Schneider 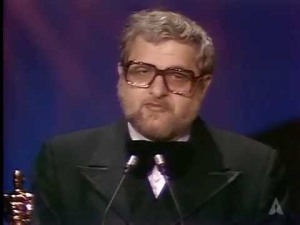 “Paddy Chavefsky wins the Oscar for Writing (Screenplay Written Directly for the Screen–based on factual material or on story material not previously published or produced) for Network at the 49th Academy Awards. Norman Mailer presents the award; hosted by Jane Fonda.”

I got more out of Paddy Chayefsky in this fourteen-minute video than I can put in this blog. But I’ll do my best, but he made the point in a brilliant and entertaining way, that I can only hope I can come within miles away about how I critique especially the American news media and entertainment industry. Why does TV and Hollywood make so many violent films and shows back then and still today? Because it is what sells and what is what the audience in America wants to see. What sells is what makes their stockholders and their companies money. The power of the private not free market in America. The consumer decides what sells and what doesn’t.

What he showed with his Network movie from 1976 is exactly what the American media, news and entertainment is about. Which is what makes them money which is based on what people watch. You want to know why hard news doesn’t sell as much as tabloid news especially today and why CNN sometimes looks like ugly twin sister of E or Bravo, is because hard news simply doesn’t sell as much as tabloid news. CNN would make a hell of a lot more money covering Kim Kardashian’s wedding or her arriving at some airport, than they would covering the jobs report or the budget deal reached by Congress and the President. Because the tabloid news is what sells in America, because that is what Americans buy.

And if you go to the entertainment divisions of the networks, where the real entertainment is supposed come from and not the news divisions, it is soap opera whether it comes from an actual soap opera, a sitcom, a cop show, or any other law enforcement show, or it is violence. Car chases, someone getting the hell beaten out of them, who the hot detective or new person on the show is seeing or wants to get involved with, or so-called reality TV. Why? Because that is what sells and that is what the people buy to the point you now have so-called hard news shows covering tabloid stories like George Zimmerman and the trouble that some hot celebrity is in, or what is supposed to be hot in technology.

All Paddy Chayefsky did with Network was to open up millions of Americans eyes to why network TV shows the programming that they do. And give us a preview of what network news would like twenty-five-thirty-years later. When news would be combined with entertainment and so-called reality TV. Why because that is what Americans are buying. If it was hard news they were interested in, those shows would get a lot more time than they do. 60 Minutes would be on three nights a week instead of once on Sunday, to use as an example.