CNN: Video: State of the Union: This Election Isn’t Over

Posted on November 2, 2014 by Kire Schneider

The victory for Democrats in 2014 might be at the state level in the governor’s and state legislature races. Where they are not only in position to win back governorships, but win them in big states. Florida, Georgia, Pennsylvania, Michigan and perhaps Ohio which might be out of reach. But they are polling well in Wisconsin as well. And in Massachusetts and Colorado where they may lose, they currently hold the state legislature’s in both states. And in Massachusetts case, they won’t lose both the governorship and legislature.

As I blogged last night, the U.S. Senate is still not out of the question, because of Georgia and Kansas where Senate Democrats are favored to pick up, at least according to the polls. Strong Democratic leaning candidates in Michelle Nunn who is a Democrat in Georgia and liberal leaning Independent Greg Orman in Kansas. But for that to mean anything, they have to hold onto North Carolina and New Hampshire where they are currently leading. And perhaps pull out Louisiana where Mary Landrieu is in a dead heat with Republican Representative Bill Cassidy.

On Tuesday night, House Republicans will not only hold their majority, but perhaps add ten seats and even have a bigger majority that they had in 2011-12 after they won back the House. But the question is who will control the Senate in the next Congress with a Republican House that has a solid majority. And perhaps no one will really control the Senate as far as getting anything done with a 50-50 or 51-49 majority. And the 114th Congress is essentially divided as well like the current Congress. 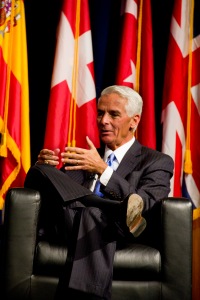 Next Governor of Florida?