PBS: Video: NewsHour: Judy Woodruff Hosts a Panel Discussion About Richard Nixon: Why Are We Still Fascinated by Richard Nixon?

Is there a more fascinating politician than Richard Nixon, that is why we are still fascinated about this man. Because there is so much to him from both good and bad. And forty years later we are still trying to learn more about the man. Every book that is written about him, or every movie that comes out about the man, or any new research and information that comes out about the man is seen by a lot of people and discussed everywhere. And not just in America, but around the world. Because of how consequential he was when it came to both American foreign and domestic policy and of course of the criminal operation inside of the White House and Watergate that along with the Nixon tapes brought down President Richard Nixon. 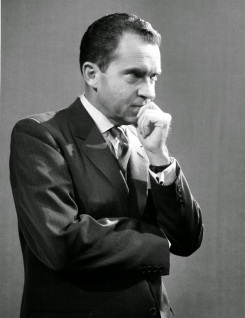