Movie Clips: Video: Family Plot 1976 Trailer: How to Find Someone Nobody Knows

Lets say you have a movie with William Devane, Bruce Dern, Ed Lauter (the best character actor that no one knows, except for me, just kidding) Karen Black and Barbara Harris.  It’s also important to know that the movie is directed by Alfred Hitchcock.  How could this movie go wrong?  Who could  possibly screw it up, a with a cast like that?  These are just the main famous names in the movie. It’s like the 1978 Pittsburgh Steelers.  How do you not win the Super Bowl with what they had to work with on both sides of the ball and Chuck Knoll as the head coach?

If there ever was a great director that everyone wanted to work with, great actors and actresses alike, it was Alfred Hitchcock.  This gave him the power to put together any type of movie he wanted and to assemble the cast he really wanted for any film that he wanted to make. That’s what power is in Hollywood and Hitch had it.  He was such a great director because he always had a great cast to work with.

Family Plot is about Eddie Shoebridge (William Devane) who wants to escape from his life and takes off without telling anyone where he is going.  He comes from a wealthy, somewhat famous, family and is a bit of a  jewel thief.  He also just happens to run or own a jewelry store, which is perfect for his other job.  His  grandmother wants to find him before she dies and hires two, at best, amateur detectives for the job.  They are wannabe actor George (Bruce Dern), whose day job is cab driver, and his girlfriend (Barbara Harris), who’s a wannabe psychic.

Shoebridge and his wife (Karen Black, R.I.P.) do not want to be discovered and quickly find out from one of their associates (Ed Lauter) that this couple is looking for them.  Shoebridge hires Ed Lauter’s character to kill the couple.  He fails and the couple spend the rest of the movie tracking down the Shoebridges and George’s girlfriend does exactly that before the Shoebridges kidnap her.

For a pair of amateur detectives, George and his girlfriend, who in their other lives aren’t very successful at anything, do a hell of a job catching the Shoebridges, who’ve gone out of their way not to be discovered by anyone from Eddie’s past.  This movie, typical for Hitch, has a lot of great humor, twist and turns of plot, including the kidnapping and the cab driver’s rescue of his girlfriend and the nailing of the Shoebridges.  They finished the job they were hired to do. 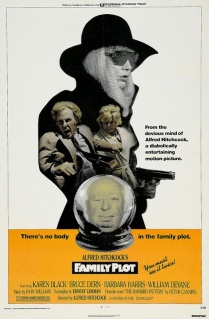